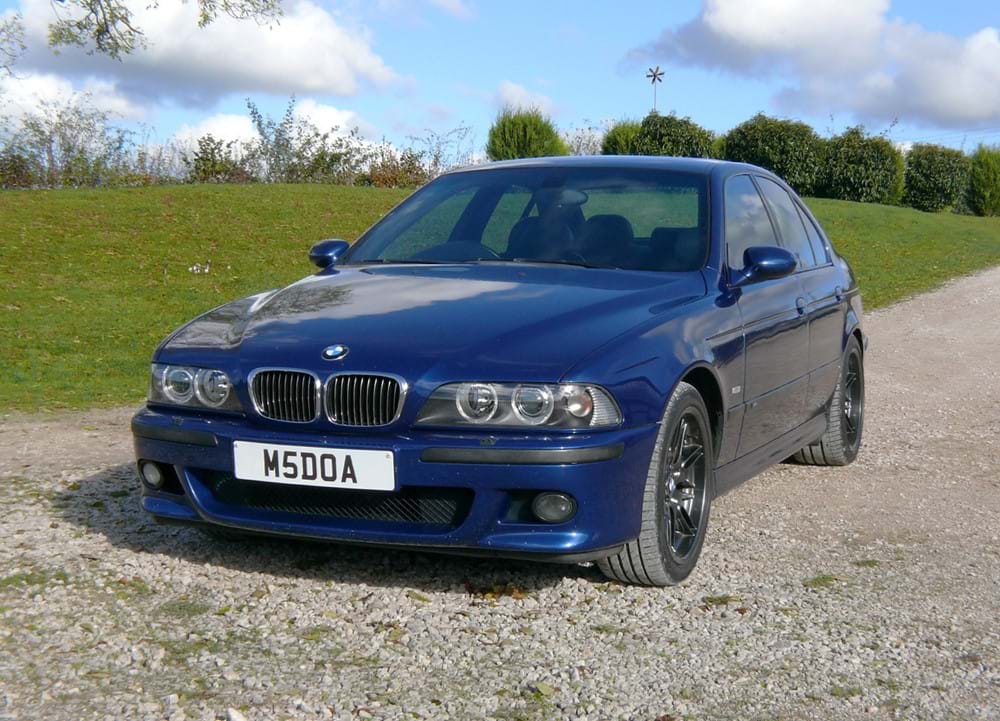 Damian Jones, Head of Sales at H&H Classics, says: “Robin Hamilton’s name still resonates with Aston Martin aficionados as the man who took the marque back to Le Mans during the 1970s (finishing 3rd-in-class in 1977), helped develop the fearsome V8 Vantage and brought the Works-backed Nimrod Group C / IMSA GT project to fruition. A lifelong engineer who served as an apprentice with Rolls-Royce Aero Engines and diversified into environmental technology after selling his Aston Martin business, Hamilton retains a love for clever design and V8 engines!"

Confident that the E39-series BMW M5 would become increasingly collectible over time – the model is already hailed by marque enthusiasts as an all-time great – he purchased several well sorted examples to use and enjoy before selling them off in 5-10 years. Powered by a free-revving 5 litre V8 engine allied to six-speed manual transmission, the super saloon had some 400PS and 500Nm at its disposal and was reputedly capable of 0-60mph in 4.8 seconds and an electronically limited 155mph.

Notable as the first all-wheel drive 5-series, the E34-series 525iX featured bespoke transmission suspension, brakes and alloys. The vast majority of the 9,366 made were supplied as left-hand drive saloons, so a right-hand drive estate piqued Hamilton’s interest. Rare as the proverbial hen’s teeth, just 36 manual examples are currently known to the DVLA. A practical classic with a dose of engineering sophistication, it is being offered for sale with a fresh MOT certificate.

Formerly the property of a specialist TVR / racing car dealer, Hamilton added the 318i Convertible to his collection as a bit of fun. A low mileage example with a recently renewed hood and air-conditioning, it promises very inexpensive ‘wind in the hair’ motoring.”

Entered from the Robin Hamilton Collection is this 2000 BMW M5, one of just 2,595 made. Running-in service at 1,489 miles and fifteen subsequent ones up to 148,758 miles. Mileage now 149,000. Recent discs / pads, 'angel eye' headlamp conversion and Michelin Pilot Sport tyres. The desirable registration mark 'M5 DOA' (M5 Dead or Alive!) is sold with the car.

Robin Hamilton comments: "This car is from my private collection with very good overall condition. I bought it last year (2017) as a good example to keep and enjoy while its value increased, probably aiming to sell in 5-10 years. Only unforeseen circumstances now require disposal of the collection earlier than anticipated.”

Hamilton says: “This was bought for my collection in 2005. Parts were replaced between then and 2008, when it was declared SORN, and it has been dry stored for the last 13 years with occasional use to keep everything sound. Bought as a good example of a very rare and interesting model.”

Its specification includes an uprated version (190bhp) of the really smooth 2.5L 6-cylinder engine, full time 4 wheel drive with electronically controlled central differential, traction control, self-levelling rear suspension, air conditioning and electric double sun roof. Many components such as transmission, suspension and brakes are unique to this model. The car drives and performs well, with impressive stability and traction. A spare set of the unique wheels and tyres are included with the car. Recent work (in last 1000 miles) includes discs, callipers and pads, front driveshaft, front struts, new battery and fuel pump. A full service history and file of invoices is supplied with the car, with a brief summary below.

Entered from the Robin Hamilton Collection and one of just 2,595 made. Mileage now 180,000. Treated to a £35,000 refurbishment including a £10,000 engine overhaul by Sytner Birmingham. £2000 nav / audio upgrade including a Pioneer 960DAB unit, rear view camera, DAB antenna, JL audio, HDMI and iPod connectivity. Vendor Condition Ratings:'Very Good or Excellent.'

A full service history and extensive file of invoices are supplied with the car, with a brief summary below. Of particular note is the sales description from last year, which summarises an extraordinary amount of work and refurbishing carried out in recent years to bring the car up to "near new" condition. This cost in excess of £35,000, including anything required, new front wings, all rubber seals, plastics, lights, re-trim, respray etc. and a £10,000 engine overhaul by Sytner Birmingham (see engine plaque). The car drives and performs as well as it looks. The comprehensive specification includes a glass sun roof, double glazing and comfort heated windscreen. A £2000 navigation and audio upgrade has been carried out, including a Pioneer 960DAB unit, rear view camera, DAB antenna, JL audio, HDMI and iPod connectivity. Special immobiliser.

'This was bought for my collection last year. It seems to be a remarkably sound car, bought from a specialist TVR/racing car dealer and with a stated mileage of only 66,000 miles, which is supported by its MOT history. Any work required for its MOT in 2017 was carried out by this dealer, who also fitted a new hood. Unfortunately there is no service history and only limited invoices. A very nice car, which drives as well as it looks. A spare set of alloy wheels and tyres are included with the car. The specification includes manually operated hood and air conditioning. It was last serviced 1,000 miles ago.