H&H Classics first Scooter Sale saw David Beckham’s England scooter from ‘Road to Lisbon’ from the 2004 Adidas campaign ‘Impossible Is Nothing’ go for £8,568  at the National Motorcycle Museum on April 6. Top priced scooter in the sale was 1966 Vespa SS90 Super Sprint which sold for £28,175. 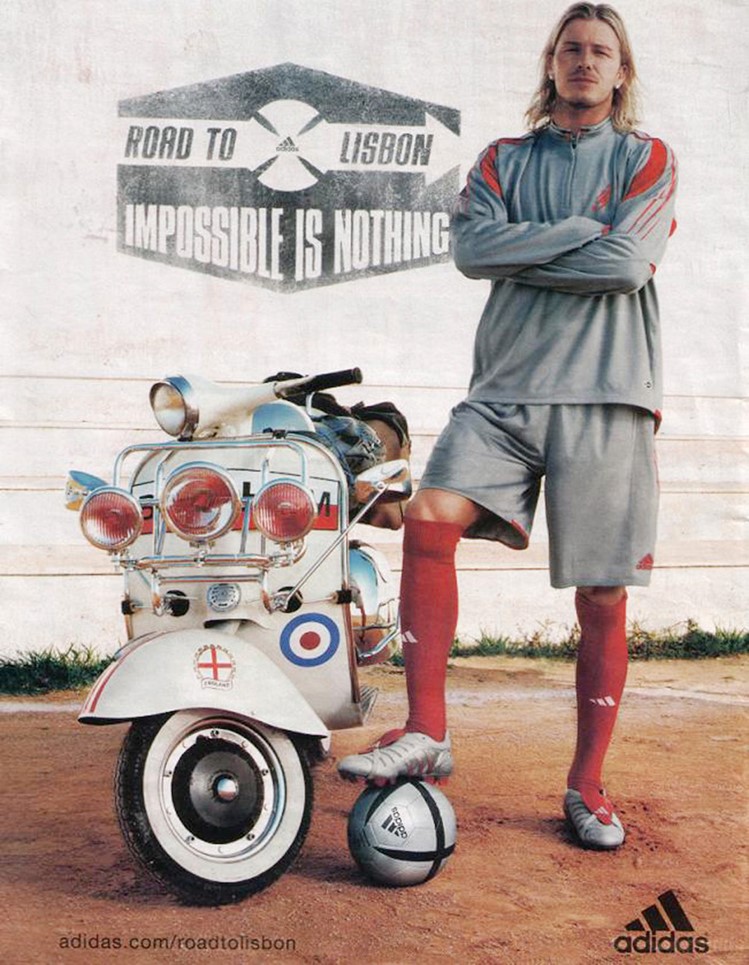 This is the actual scooter used in the 2004 Adidas advertisement kept by David Beckham for a period of time at his home after filming, as confirmed by  the shoot production team at Adidas. Beckham liked the scooter so much he had it shipped to his house in Hampshire where it stayed for two years.  The scooter was then used as a competition prize and won by a member of the public.

Paul Diamond, who heads H&H Scooter Auctions, says: “This scooter is of major interest to sports memorabilia, scooter, England Football and Adidas collectors.  It would make a fantastic addition to any scooter or bike collection.” 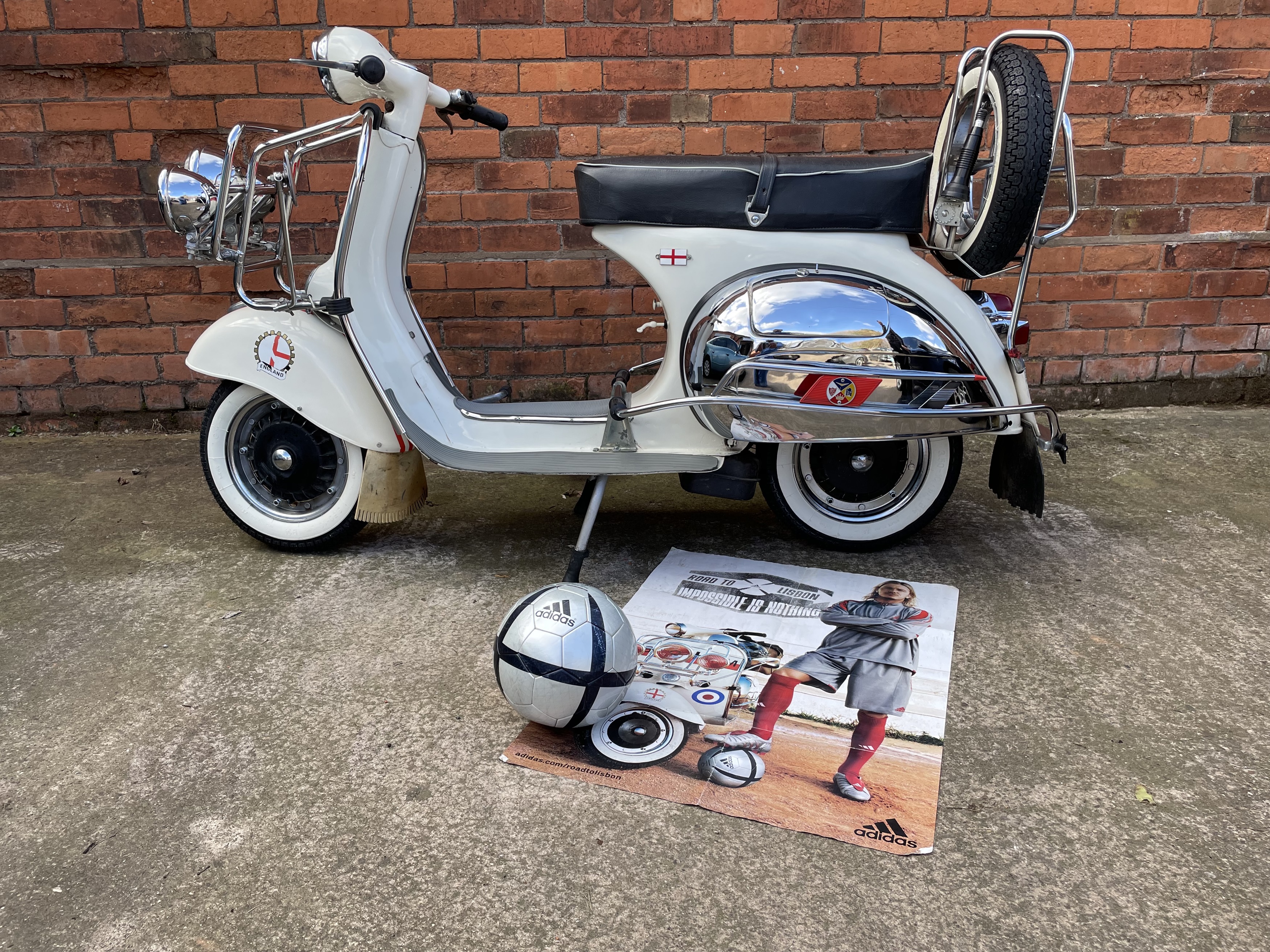 The scooter runs and has a UK V5 for use on the road. It is complete and in very good general condition with correct chassis and engine numbers for the model. Tt has a standard engine and is unmodified except for the creative decorations for the TV advert.

The action television advertisement ‘Road to Lisbon’ starred 13 of the top footballers in Europe and was devised jointly by 180 Amsterdam and TBWA the creative advertising agencies and major global brand Adidas who were awarded advertiser of the year in that year.

Arriving from across Europe at a rustic local Portuguese football game on their individually ‘nationally’ designed classic scooters were David Beckham, Zinedine Zidane, Ashley Cole, Michael Ballack and the other leading European soccer icons of 2004.  The advertisement cost 4.5 million euros just to produce and was part of the global ‘Impossible is Nothing’ Adidas campaign.

This scooter represented an unrepeatable opportunity to acquire an original SS90with a full detailed history and provenance plus original photographs and news cuttings. It was imported into the UK by Vespa Douglas & sold new to the Moto Baldet dealership on 15th August 1966, and is in fully running codition on recommissioned original engine. It is correct numbers item with its original Green log book and continuation book and has a V5 present for use on UK roads. 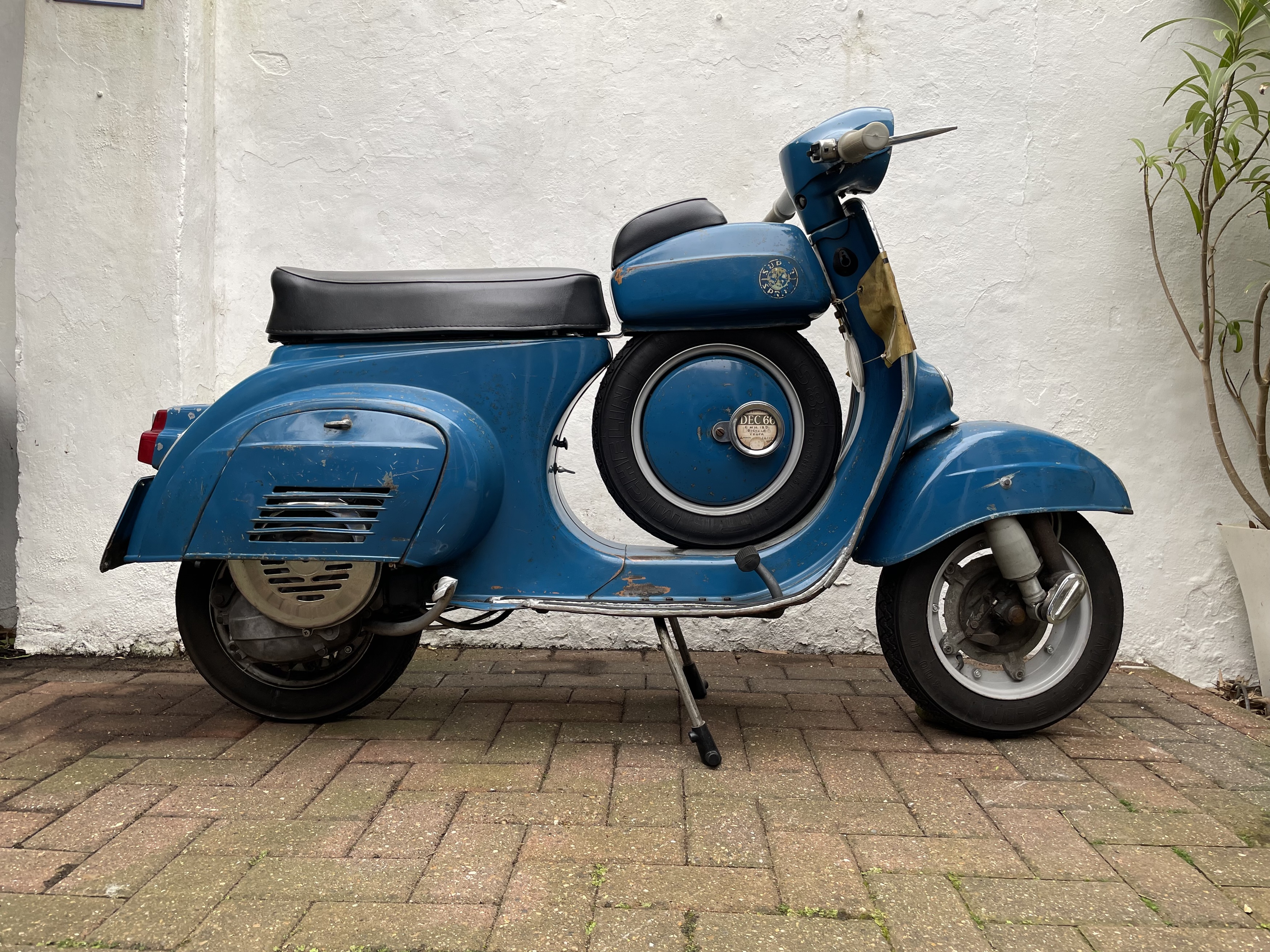 By the early 1960’s Vespa Douglas in Great Britain were importing Italian built Vespas as opposed to continuing to manufacture them. The Vespa SS90 made between 1965 and 1971 is much sought after by collectors due to its extreme rarity and only just over 5000 were produced. Most of these have been lost to the ravages of time and overly ambitious riders. The SS90 was developed as a sporting variant of the small frame Vespas. With a dummy fuel tank, a centrally located spare wheel, narrower more aerodynamic fairing and a pad on top of the dummy tank riders could crouch low behind the headlight to reduce drag at higher speeds. The two-stroke 88.5 cc engine used in the Super Sprint is a single-cylinder, air-cooled unit with a bore/stroke of 47/51 mm and an 8.7:1 compression ratio. It’s paired with a 4-speed gearbox, the dry weight is 77 kilograms, and the top speed is 93 km/h (58 MPH).

Carl's personal team 'Ducati Corsa' paddock scooter, his last ever from the 2000 WSB season.Only Carl's name as the registered owner on the V5C logbook.

This was a unique opportunity to acquire a genuine ex 'Foggy' bike, signed by Carl and supplied with proof of provenance.

Carl Fogarty is a 7 times World Champion and one of the greatest British motorcycle racers of all time, the last rider who could win at World Championship level on the short circuits but also equally at home on the demanding road circuits such as the Isle of Man TT. A brilliant all-rounder his early successes came in the road based Formula 1 series, including 3 TT wins and a circuit record that stood for 7 years, ultimately winning the championship 3 years in a row. Moving onto the World Superbike Championship in 1992 he became one of the only true privateers to ever win a WSB race as well as winning the World Endurance Championship on a Kawasaki. Joining the official Ducati team in 1993 he began a period of dominance over the next few years that gave him 59 victories and 109 podiums on the way to 4 World Championships in probably the most competitive era of the sport. After dominating the championship in 1999, a crash at the 2000 Australian round of the championship led to his eventual retirement at the end of that season.