Celebrity Cars set to light up The Duxford Auction 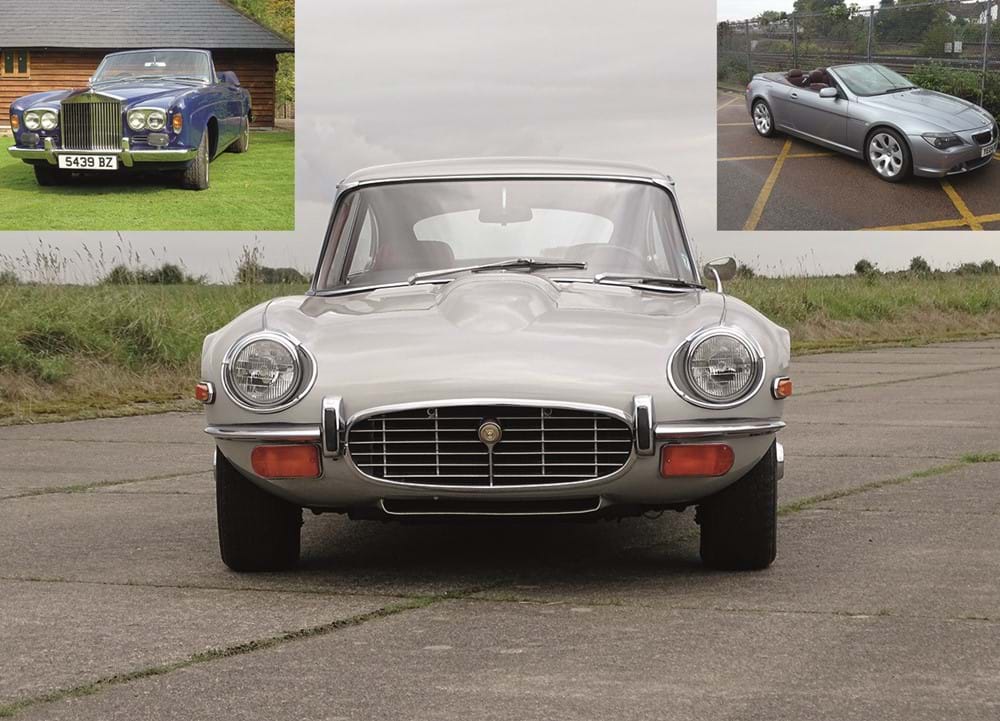 Naturally favoured by the rich and famous, it is no surprise that the Rolls-Royce was owned in the 1970s by the late Sir Bruce Forsyth CBE, then enjoying considerable success on the nation's television screens. Invoices on file to him cover the period to 1978 when it is understood the car was sold. By 1987 it was in the possession of Alpine Grant, the brother of musician Eddy Grant.

Passing through the custody of four other keepers, it was acquired by the vendor in 2006. In production between 1971 and 1996, the Rolls-Royce Corniche Drophead came to epitomize luxury open-air motoring. An accepted accoutrement alongside the private jet and crewed yacht, it was fabled for its extravagantly sumptuous interior and hushed drivetrain. Named after a region famous for its gently winding roads and breathtaking scenery, it was powered by a tuned version of Crewe's staple 6750cc V8 engine mated to automatic transmission. Equipped with firmer springs, thicker anti-roll bars together and revised steering geometry, it proved a more satisfying drive than its humbler saloon car siblings. Though, the presence of olio-pneumatic suspension and a plethora of electric motors ensured that it remained a singularly cosseting experience.

Nick Lumby, Senior Specialist at H&H says: “A Corniche oozes elegance and luxury as much today as it did when new and we are delighted to offer this cosseted example which also benefits from celebrity ownership having been purchased new by the late and much missed Sir Bruce Forsyth. The quality and craftsmanship that appealed to him then remain to be enjoyed by its new custodian.

This elegant 2004 BMW 645i Convertible was owned by the late Tara Palmer-Tomkinson from nearly new up to her passing away in February this year.

Tara, a former ‘It’ girl, constantly in the celebrity and socialite media did, by all accounts love her BMW. In general the car is in very good condition. Her brother James Palmer-Tomkinson registered it in his name as the V5C or handbooks could not be found and it has not been used since Tara died. The family is looking to sell it and the proceeds have been left to Tara’s nieces and nephews.

At one point the car was stolen to order by a notorious gang who took 34 high worth cars with a total value of nearly £2 million pounds. Only six of the cars they stole were ever recovered by the police, one was Tara’s, the rest went abroad with new identities created by a ‘master forger’. Commenting to the press at the time she said: “It’s my pride and joy. If anyone can help me I will be happy to treat them to dinner”. Tara’s car was found at Birmingham Airport before it could leave the country in 2005.

Nick Lumby, Senior Specialist for H&H Classics says: “You wouldn’t necessarily buy one for the school run but BMW’s 6-series Convertible is surprisingly practical for a high-performance soft-top and certainly has the ‘feel good factor’. For a 4.6 litre V8 it can get 30 mpg on a leisurely run on the motorway. It is a lovely car to drive.”

One of the rarest E-Types ever built, referred to by Jaguar Enthusiast magazine as 'A Ghost of an E-Type' and 'the one missing link' (August 2017 issue), this rarity is offered by H&H Classics from the collection of fabled music producer Pete Waterman.

This classic E-Type has been in Pete Waterman’s care since the late 1980s. Chassis Number One and Body Number One, it is the first left-hand drive Series III 2+2-seater made and the only example fitted with a 4.2-litre XK engine.

Carefully dry stored during Mr Waterman's custodianship, chassis 1W70001 has been recommissioned and repainted in recent years but remains notably original. Boasting a number of unique features (which have been chronicled by marque specialist XK Engineering), this decidedly special E-Type would grace any Jaguar collection.