Found in a Staffordshire, this wonderful barn-find discovery is going to make a fabulous restoration project for someone lucky enough to secure it at the next H&H Classics Live Auction Online on July 22. It is estimated to sell for £15,000 to £20,000 at the auction.

One just like this Sunbeam Alpine found fame at the hands of Works drivers Stirling Moss and Sheila Van Damm and also starred in the 1955 film ‘To Catch A Thief’, featuring Cary Grant and Grace Kelly.

This rare car is one of just 200 known survivors and is offered as a 'barn find’. It has been dry stored since retiring from historic rallying. Its engine is in running order and it appears to be substantially complete. Its history file includes the original buff logbook and FIA HVIF papers. 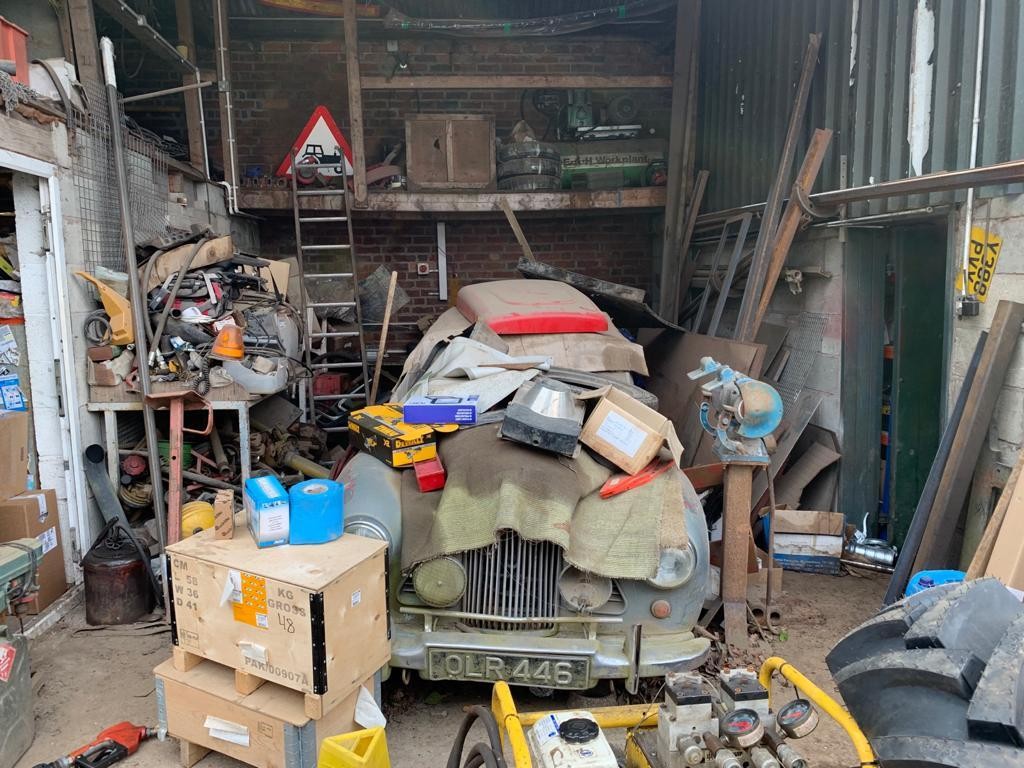 According to its original buff logbook, Chassis A303819HRO was first registered as ‘OLR 446’ to Rootes Ltd on 10th February 1954. Acquired by Robert Stephenson Clarke Esq of Brook House, Ardingly, Sussex on 1st August 1954, the same document notes the installation of a correct type replacement engine later that same month (presumably under warranty).

Migrating from Sussex to Yorkshire the following decade, the Sunbeam had been partially renovated by the time it entered Bill Purser’s ownership in 1979-1980. Having run the car for a couple of years Mr Purser undertook a further, and more thorough, restoration which encompassed the fitting of new sills and rear wheel arches plus an engine overhaul, retrimmed interior and fresh hood.

The boot still houses a selection of spares in an old ammunition case, while the dashboard plays host to some additional switches and an auxiliary rev counter. Modifications include a slightly later Sunbeam MKIII engine, Kenlowe fan, uprated air filter and gear lever mounted overdrive switch.

Despite being dry stored for the past two decades or so, the Sunbeam has been running recently courtesy of a slave battery and jury-rigged fuel system. Offered for sale as a restoration project, this rare Alpine appears substantially complete and has the makings of a great project.

Though developed from the Sunbeam-Talbot 90, the Alpine was the first Rootes Group product to wear just the Sunbeam badge. The design was inspired by Rootes friend and Bournemouth-based Sunbeam-Talbot dealer George Hartwell and finalised by Raymond Loewy. Norman Garrad of Rootes's competition department was supposedly responsible for the name, which was in honour of the company's numerous successes on the Alpine Rally.

The Alpine bodies were hand-made by Mulliners Ltd of Birmingham and the cars were powered by a mildly-tuned version of the 2267cc four-cylinder engine from the Sunbeam-Talbot 90, which gave around 80bhp at 4200rpm. The Alpine was manufactured from 1953 to 1955, during which time some 1,282 MKIs and 300 MKIIIs were produced (there was no MKII version), of which relatively few remain - possibly no more than 200.