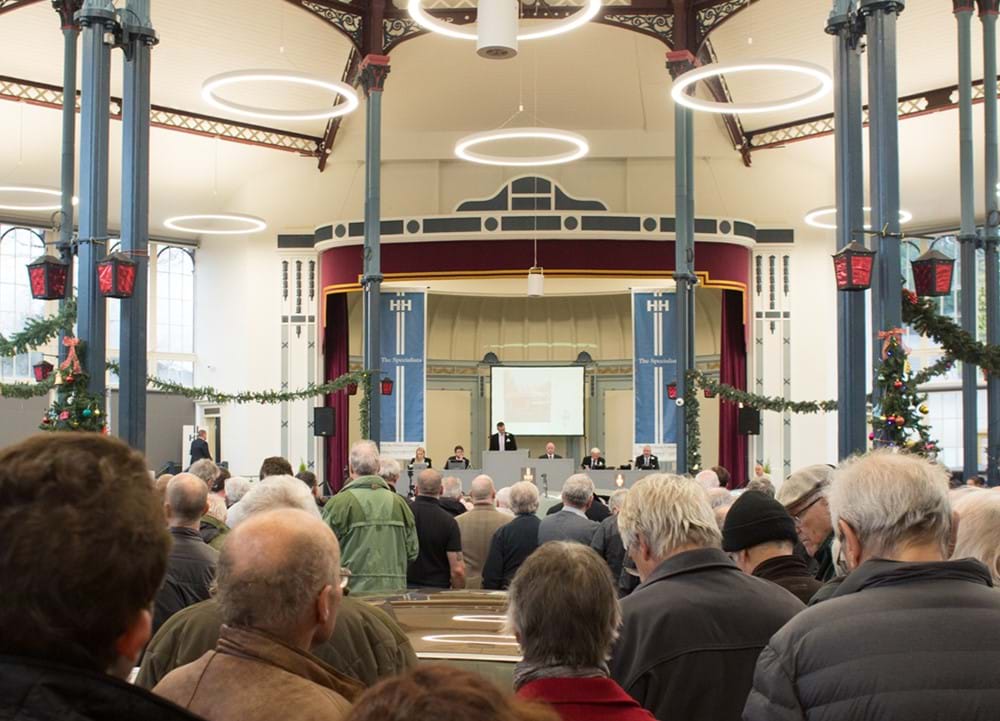 Top item in the sale was this red 1961 Jaguar E-Type 3.8 Flat Floor Roadster which sold to an internet bidder for £115,000. A notably early example – the 290th RHD Roadster to leave Jaguar’s Browns Lane factory – it had been in the vendor’s family since 1992. Presenting as an older, home restoration, the E-Type had scope for improvement but boasted ‘matching’ chassis and engine numbers.

Sold for just under £13,000 this charming Mini, one of only 2,000 Cherry Red examples built to celebrate the model’s 30th Anniversary, had had one lady owner and covered just 4,000 miles from new. It boasted its original sale agreement, book pack, keys, number plates, supplier sticker and tax disc holder.

‘HENRIETTA’ ROLLS-ROYCE 20HP TOURER, RACER, ROYAL CONVEYANCE, WITH WW2 ACTION IN MALAYA – A CAR WITH A HISTORY WORTHY OF A FILM SOLD FOR £49,450

Some cars have led more exciting lives than others but very few can rival the exploits of this unique Rolls-Royce 20hp Tourer.

This amazing and much loved car has had more lives than a cat. It has graced the roads and race events of Britain and Malaysia and has criss-crossed the oceans more than a few times in its 92-year history. Damian Jones, Head of Sales at H&H Classics, says: “This fabulous Hooper-bodied Twenty requires recommissioning but boasts a life story worthy of a book or film!”

Ordered from the Clyde Automobile Company Ltd of Glasgow by Chung Thye Phin MSC, JP - a tin miner and rubber planter who was not only the richest man in Penang but also notable as the last Kapitan China of Perak - chassis GCK32 was delivered to Hooper & Co on February 1st 1926. Renowned for the exceptional quality of their coachwork and holder of a Royal Warrant at the time, the London firm clothed the 20hp Rolls-Royce with a beautifully proportioned four-door, dual cowl Tourer body. Destined for use in the Malay States (now Malaysia), the car featured a louvered 'Colonial' bonnet and uprated suspension (heavier duty leaf springs). Loaded aboard the SS Benalden on 26th May 1926, chassis GCK32 became the property of Kapitan Thye Phin's nephew, Choon Kee Lam when it arrived in Penang.

It was reputedly loaned to the visiting Duke of Gloucester in the late 1920s and requisitioned by both Japanese and British forces during World War Two. Sold to British expat Henry Stonor, the Rolls-Royce soon became a familiar sight around the rubber plantations of Bagan Serai and accompanied him when he returned to the UK on leave in December 1951. Taken to Rolls-Royce’s Crewe factory for a thorough check over and subsequently treated to an engine overhaul, the rejuvenated 20hp was  shipped back to Malaya aboard the SS Ulysses in 1952. A founder member of the Vintage Car Club of Malaya, Mr Stonor piloted the Tourer to 2nd place behind a Bentley Speed Six at the November 1953 Malacca Speed Trials, 2nd place behind an Alvis Silver Eagle at the July 1954 Sungei Way Sprint and 1st place ahead of a Rolls-Royce Silver Ghost and Jaguar SS100 at the October 1954 Rally of Malaya (covering 320 miles of largely unmade roads in nine hours).

Vintage Class winner at the July 1958 Seremban Sprint, the 20hp appeared in the documentary film 'The Oil that grows on Trees' two years later and transported HRH Prince Richard of Gloucester around Malaya in January 1963. A fitting swansong, the Rolls-Royce finished an impressive 3rd overall in a support race at the 1967 Malaysian Grand Prix. Repatriated once more by Eric Lister, a Manchester-based art dealer who befriended fellow music lover Stoner whilst on a trip to the Far East, the Tourer was sold to race car engineer / car dealer J.A. Pearce who entered it for a Sotheby's Vintage car auction on 15th May 1969. Although unsold on the day, 'MLV 347' became part of the renowned Sharpe Family Collection the next month.

Repainted several times, rewired and re-trimmed in Malaya (though, its sidescreens went missing during the Japanese occupation), chassis GCK32 lay dormant until the mid-2000s when it was mechanically checked over and put back into service. Acquired by the Real Car Company in June 2012, the 20hp was treated to 'a kingpin overhaul, service, four fresh tyres and all work required to bring the car up to MOT standard' prior to being sold to the vendor's late father, Alan Giles. A lifelong car enthusiast, Mr Giles spent thirty odd years working for Wearne Brothers Ltd in Malaysia which is where he first encountered the Rolls-Royce and befriended Mr Stonor. The latter always regretted selling 'Henrietta' (as he christened the Tourer) and spent decades trying to track her down but died six years before she emerged from the Sharpe Family Collection. Health problems and old age prevented Mr Giles driving 'MLV 347' as intended but he did manage to install a new exhaust system, clean the Malaysian dirt / mud off the underside, fit new spring gaiters and refurbish the flywheel ring gear.

Auction is often the best way of establishing the value of a unique item and that certainly proved to be the case when an eye-catching, one off Bentley Mulsanne Turbo went under the hammer in front of H&H’s packed saleroom. Finished in Mustard over Claret and professionally coachbuilt by Coway Ltd of West Horton, Lancashire, the imposing Shooting Brake featured a pull-out awning, drinks refrigerator, colour-coded umbrellas and satellite navigation. Offered without reserve, its sale for £35,650 to a room bidder who vanquished internet and telephone competition elicited a generous round of applause.