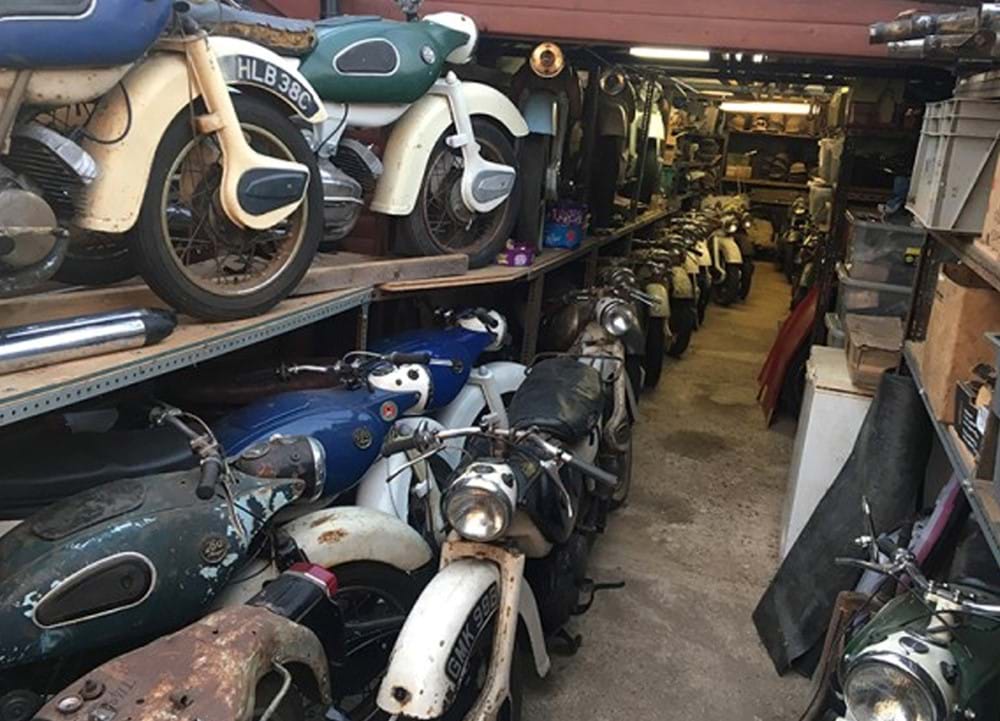 at H&H Classics in Donington throughout 2017

H&H Classics will be selling a collection of 30 unrestored Ariel motorbikes at Donington Park this year- Arrows, Arrow Sports and Leaders, discovered over the last 30 years by Clive Pearson of Leicester for whom they have been a lifelong passion.

This big collection includes a range of parts too. Mr Pearson, 68, is selling the bikes to fund his other passion German WW2 machines. He wants to locate and restore a German tracked motorbike, known as a Kettenkrad – a motorbike with tank tracks - having restored one in the past. Surprisingly they are road legal as they have rubber treads in the metal track.

Mark Bryan of the H&H motorbike department says: “This is a unique collection. Ariel stopped producing four stroke singles in 1959 in order to compete with the Japanese motorbike invasion and produced two stroke bikes, the Ariel 250 Leader and latterly the Arrow, Arrow Sport and Arrow 200. But the competition proved too stiff and they ceased trading in 1967.”

“Ariel Motorcycles acquired an image and a level of respect that was perhaps greater than the number of bikes sold. But always robust and considered reliable for their time, they were well rated machines of the period, as they are even more so today given the level of collecting interest.”

Clive Pearson says his passion for the Ariel started when against his parents wishes he bought one for £10 because he was so taken with its “futuristic look”. His ambition was always to own an Ariel Supersport Golden Arrow which at the time cost £79 and ten shillings but his parents would not sub him. Years later when his father was 90 he told Clive that having said no all those years ago he would now relent and buy one for him and this bike is Clive’s pride and joy today and is not a part of the collection being sold.

A foundry pattern-maker by trade Clive’s knowledge of bike engines and structure is profound. He says that what he really loved about Ariels was their fantastic ability to corner, outperforming 650cc Triumphs easily round bends thanks to a leading link in the bike’s front fork which gave it its cornering ability.

After many years of collecting German WW2 machinery included the kettenkrads he returned to his first love and built up this wonderful collection of Ariels. “I searched out those bikes that were going to be broken up for scrap and rebuilt them. My idea was to save them for posterity.” Now the time has come to pass them on to others who love this marque.

Asked why he was so keen on using the money raised by the sale of the Ariels for another Kettenkrad he said: “In first gear they can pull down a house and in top gear they can do 50mph. Once I pulled a 13 ton beer truck out of the mud at a festival with my Kettenkrad after a Landrover made no headway. We ended up having free beer all weekend!”