A ‘hands on’ director of Lincoln Cars Ltd, Sir Malcolm Campbell MBE kept Blue Bird K4 (his World Water Speed Record achieving boat) at the company’s Brentford premises on London’s Great West Road. Well known to the senior Ford hierarchy on both sides of the Atlantic, he was able to secure a brand new, ‘overseas market’ example of the Mercury Eight Series 99A upon its 1939 launch (Lincoln and Mercury were both Ford subsidiaries).

Intending it to serve as a Crew Bus for his Blue Bird escapades, Campbell despatched the Mercury to Windovers of The Hyde, Hendon. As well as fitting a voluminous Estate Car body, the famous coachbuilder ensured the rear seats folded flat to form a bed. That way, Campbell’s mechanics could take it in turns to get some rest while burning the midnight oil during one of his record-breaking adventures. Ever one to pursue an advantage, Campbell also had the Mercury Eight’s front suspension modified by Leslie Ballamy. Unfortunately, World War Two intervened before Campbell could use his bespoke Series 99A as intended.

A ferry pilot for the Royal Flying Corps in World War One, Campbell was deemed too old for frontline service when global hostilities resumed during September 1939. He nevertheless remained committed to the Armed Forces serving with both the Military Police and General Service Corps. Introduced to George Formby, then the UK’s best paid star, and learning of his promised trip to North Africa with the Entertainments National Service Association (ENSA), Campbell soon convinced him of the Mercury’s merits. Entrusted to REME (Royal Electrical and Mechanical Engineers), the Estate Car was promptly modified for desert work with a new livery, larger wheels / tyres and partially painted-out windows to lessen the sun’s glare. Formby took pains to familiarise himself with the Series 99A and was seen driving around Singleton for weeks before embarking upon a massive 53-day ENSA tour in August 1943 that encompassed Italy, Sicily, Malta, Gibraltar, Libya, Tunisia, Egypt, Lebanon and Palestine.

A serial Rolls-Royce and Bentley owner, Formby sold the Estate Car to Earl Peel of Hyning Hall, Lancaster in 1946 who promptly had it road registered as ‘GVM 926’. A fixture on the Peel Estate up until the Earl’s death twenty-three years later, the Series 99A primarily served as transport for grouse shooting parties.

Briefly belonging to William Logan – the first president of the George Formby Society – the Mercury then spent much of the 1970s ferrying guests around for Mr Deakin, a Lake District hotelier. Joining the burgeoning Sorn Castle collection in 1977 - which housed everything from a Sherman Tank to a De Tomaso Pantera Gp4 racer via Aston Martins, Bentleys, Ferraris, Lamborghinis, Lancias and some wild American Muscle Cars – the Estate Car underwent a degree of restoration such as the fitment of a correct-type replacement 3.9 litre V8 engine.

Participating in a variety of historic military vehicle events including a sortie to Holland during 1986, the Series 99A was offered for sale by Sotheby’s two years later when the premature death of Bobby McIntyre, Lord Sorn’s son, prompted the collection’s dispersal. The Mercury’s next owner was British businessman Keith Schellenberg who was variously known to the public for participating in the 1956 and 1964 Winter Olympics, rolling a Vintage Bentley on the 1968 London to Sydney Marathon and his contentious ownership of the Scottish Isle of Eigg.

After five years of polite refusal, collector Graham Greenwell finally convinced Schellenberg to part with the Estate Car during 1995. The subject of a two-page article in Classic Car Weekly the following year, ‘GVM 926’ was enthusiastically used and improved by Mr Greenwell until 2008 when it was sold to the vendors’ late father, Mike Ebeling, for £30,000.

Renowned in historic military vehicle circles for the quality and accuracy of his restoration work, the late Mr Ebeling decided that the Series 99A was not to his exacting standards. Dry stored awaiting a ground-up refurbishment that never happened, he had got as far as stripping ancillaries and minor parts off the Mercury before ill health intervened.

There can be few cars with such a rich back story. Unique in so many ways, not the least of which is its bespoke Windovers coachwork, this historic Mercury is surely worthy of a return to its former glory and a place in a museum or major collection. Offered for sale with history file including copy correspondence between Sir Malcolm Campbell and Leslie Ballamy, a wealth of George Formby related literature and Sotheby’s Sorn Castle catalogue. 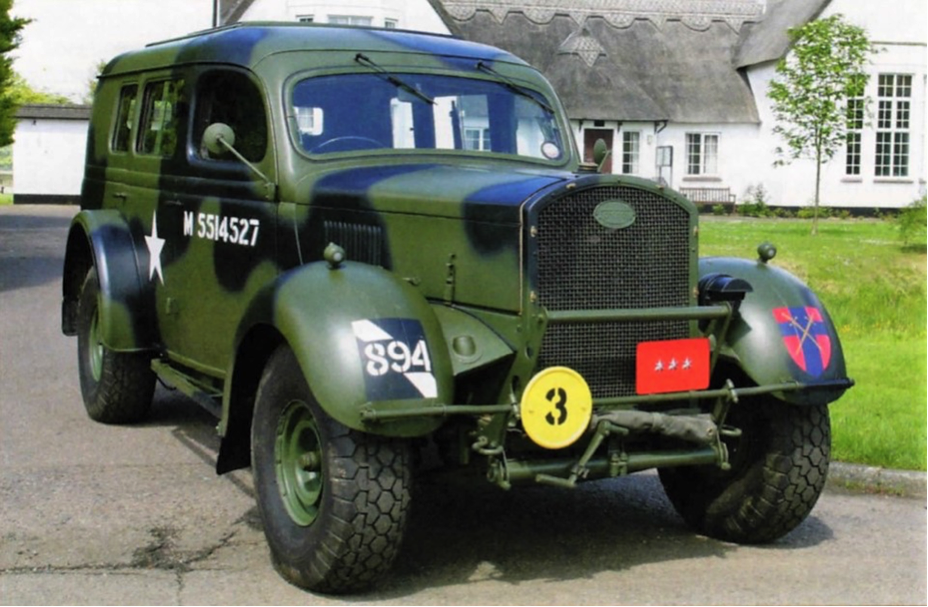 Possibly the finest example of its kind in existence

The Miracle of Dunkirk which saw 800 boats (many of them fishing vessels and pleasure craft) evacuate some 340,000 Allied troops over the course of just eight days, May 26th – June 4th 1940, proved pivotal to the outcome of World War Two but also caused a major logistical headache with the abandonment of 85,000 vehicles in Northern France. Requisitioning passenger cars for Staff and Command usage as a stopgap, the War Office put out urgent requests to UK manufacturers for more suitable replacements. Ford responded with the WOA1 and WOA2. Both were derived from the Ford’s pre-war Model 62 Saloon but with a strengthened chassis, bigger 3.6 litre V8 engine, lower ratio back axle and 9.00 x 13 cross-country tyres.

However, while the WOA1 resembled a jacked-up version of its civilian sibling, the latter wore a bespoke six-light body of imposing proportions (14ft 5in long, 6ft 3in wide and 5ft 10in tall). Designated as ‘Staff’ and ‘Heavy Utility’ cars respectively despite a comparatively modest 80kg weight difference, the pair saw active service in a variety of combat theatres.

Despite Princess Elizabeth (now HM The Queen) famously piloting a WOA1, the Armed Forces showed a marked preference for the WOA2. Ford built some 9,059 of its ‘Heavy Utility’ cars between May 1941 and July 1944 and also released a less butch / more tarmac friendly WOA2/A variant when peace came. Tough, dependable and commodious, the six-seater was repurposed by ambulance services, utility companies and landowners throughout the UK. Literally driven into the ground with more than a few meeting their end via stock car racing (though, not before two starred in the Dambusters and Guns of Navarone), WOA2s are a decidedly rare sight today. Indeed, some sources put the number of known survivors as low as six.

This particular example – chassis 7038837 – took the late Mike Ebeling, a noted WW2 vehicle restorer, four years of intensive work to return to its former glory (1997-2001). Known for his relentless pursuit of authenticity, Mr Ebeling used parts from five donors to renovate the WOA2.

Interviewed by Classic Military Vehicle magazine in 2006, he explained his motivation thus: ‘To own a vehicle, or type of vehicle, that played a part in the most awe-inspiring conflict the world has ever known gives me the inspiration to see the restoration through to the end. If I am honest, I get more of a kick from the research and the restoration work than I do from driving the vehicle. Days spent at the Imperial War Museum’s photo library in Lambeth going over photos with a magnifying glass, endless research into the manufacture and variations in design, the arm of service that would have used the vehicle, and even the equipment carried. Maybe, in some way, I do all this work in memory of my father who was killed in France a month or so after D-Day. Of course, my life in the motor trade and service with the REME must also play a part in my enthusiasm for the hobby’.

Liveried in authentic Headquarters 21st Army Group 1944 markings (a unit that operated WOA2s), the Ford has won numerous awards and remains highly presentable some twenty years after its completion. Beautifully and correctly detailed throughout from its sliding steel sunroof to its rear convoy light, the six-seater further boasts such niceties as folding map tables and headlining-mounted canvas blinds.

A Command Car with a commanding presence, the styling of which echoes through to today’s SUVs, this wonderful WOA2 is worthy of close inspection. A fitting tribute to the late Mr Ebeling’s remarkable skill, it surely belongs in a museum or major collection.