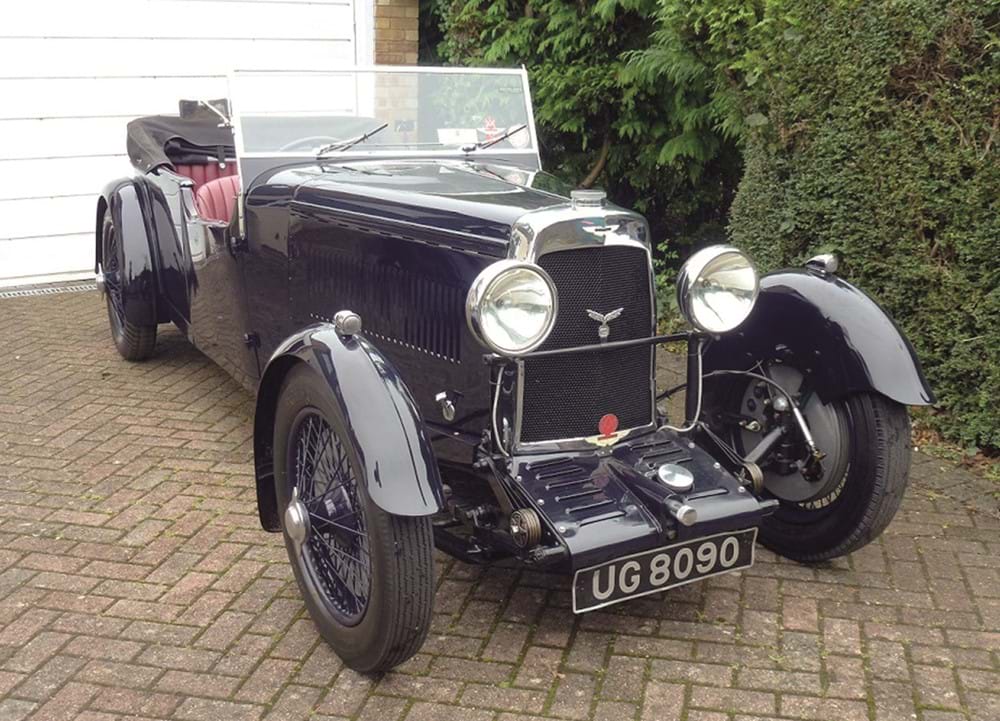 H&H Classics are delighted to offer this 1934 Aston Martin, one of the very few examples produced on the long-wheelbase Standard chassis and originally bodied as a saloon and finished in black / maroon with black leather. The car comes to auction at the H&H Classics sale at Duxford on November 15th for an estimated £90,000 to £110,000.

Previous owners Richard and Sandra Loveys used the car extensively over 35 years at Aston Martin events and also took part in the Norwich Union Classic Run on numerous occasions, and in 2005 formed part of the St George's Day parade at Windsor in front of HM The Queen.

In 2016 the car was repainted in dark blue and trimmed with burgundy leather. A new hood, tonneau and sidescreens were also fitted. Offered with detailed history file and Swansea V5C.

One of very few examples produced on the long-wheelbase Standard chassis, the car was originally bodied as a saloon and finished in black and maroon with black leather.

The accompanying chassis card shows the first owner as one E C Peacock Esq of Castleford. Two further owners are listed, the most recent being W G Paddon (1946), while the AMOC Register records the car as participating in the 1938 International Scottish Rally driven by Christopher Angell. Angell modified the car with 'helmet' front wings and twin outside exhaust pipes, and repainted it white.

An old-style continuation logbook lists Roy French as owner in 1968, followed by Richard Loveys, from 1971. By then it had been re-bodied as a tourer, as evidenced by reference to a 1967 advertisement in accompanying correspondence. Some restoration work had been done by Roy French, including the interior; nevertheless, it was decided to strip the car down to the chassis and rebuild it. Various specialists, principally Morntane Engineering, carried out the works, which were completed in 1979. The car was now painted white with green interior, re-trimmed later in tan leather.

“This lovely old Aston Martin represents the best of British have battled many a rally and appeared before the Queen, you couldn’t ask for a better slice of British motorsport history. Its patina speaks of decades of fun and motoring pleasure. This is a car to be treasured.”