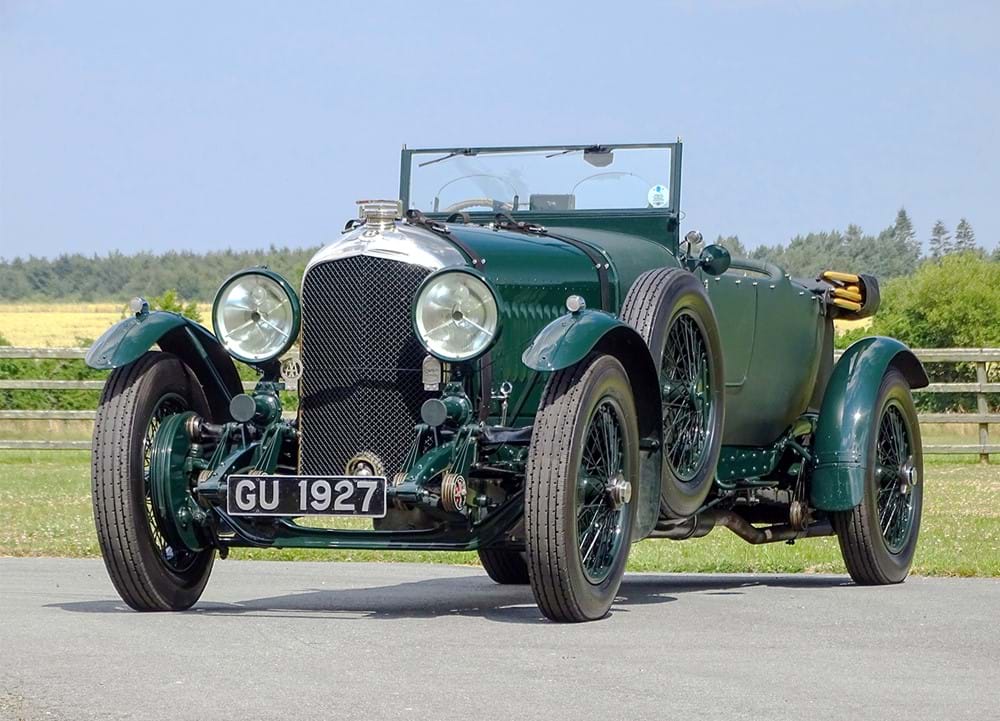 This car was supplied new to the man who not only bankrolled four out of Bentley’s five Le Mans 24-hours victories during the Vintage era but also achieved three of them.

Nicknamed ‘Mr 100%’ by the Automobile Club de l’Ouest which organises the Le Mans 24-hours because of his unmatched starts-to-wins ratio, Woolf ‘Babe’ Barnato was the son of a billionaire whose wealth had come via numerous South African diamond and gold mines. As Chairman and majority shareholder of Bentley Motors, Barnato had his absolute pick of the company’s products. One of just two normally aspirated 4½ Litre cars that he took delivery of (the other being ‘YH 3196’ which no longer exists in its original form), ‘GU 1927’ represents a concrete link to the man who saved one of Britain’s greatest marques.

Damian Jones, Head of Sales for H&H Classics, says: “This is one of those cars that it is almost impossible to put a value on given its history. But for its owner pumping money into Bentley, the company may now be just a dim memory instead of being one of the world’s leading luxury brands. And then there is the glamour of the gilded Barnato name. This is a must buy for anyone who has a passion for Bentley.”

Barney Barnato became a billionaire in today's terms when he sold the Kimberley Central Diamond Mining Company to Cecil Rhodes' competing De Beers firm in 1889. His son Woolf Barnato was born on 27th September 1895 at Spencer House, 27 St. James Place, London. Educated at Charterhouse School and Cambridge University where the lack of a driving licence did not prevent him from crashing his elder brother's two-cylinder Renault through a shop window, he joined the Royal Field Artillery during World War One. Enduring the horrors of Passchendaele and fighting as far afield as Gaza and the Jordan Valley, Barnato had risen to the rank of Captain by the advent of peace.

Forced to take legal action so as to unlock his inheritance, the early 1920s saw him emerge as one of the UK's richest people. A supreme sportsman, Barnato excelled at golf, cricket, shooting, swimming, boxing, power boat racing and motor car racing. Ardenrun Hall, his 1,000 acre Surrey estate, boasted its own golf course, pub and cricket nets (the latter good enough to entice Don Bradman to practice in). A familiar face at Brooklands and personal friend of both Sir Malcolm Campbell and Ettore Bugatti, Barnato campaigned a variety of machinery but did not buy a Bentley until 1925. Legend has it that the ebullient playboy would have acquired one of Cricklewood's products sooner had he not mistaken W.O.'s reserve for standoffishness. Enticed into becoming a 'Bentley Boy' by marque concessionaire and fellow WW1 veteran Captain John Duff, Barnato swiftly became leader of the pack.

Part of the Works Team alongside Duff and Dr J.D. Benjafield which set new 1,000km and 24-hour speed records at Montlhery in September 1925 aboard a Bentley 3 Litre, that same year saw him save the fledgling manufacturer from bankruptcy via a cash injection of £100,000 (c.£6,000,000 today). A further £175,000 followed by the decade's end as did a restructuring of the company which left Barnato as Chairman elect with 149,500 shares (out of 150,000). Single-handedly responsible for bankrolling Bentley's 1927, 1928, 1929 and 1930 Le Mans 24-hour victories, he co-drove on the latter three occasions and thanks to his perfect starts-to-wins ratio at La Sarthe was christened 'Mr 100%' by the event's organisers, the Automobile Club de l'Ouest.

Having funded the development of the 6½ Litre and 4½ Litre, Barnato had his pick of Cricklewood models and was only too happy to demonstrate them to the Bright Young Things of the Jazz Age. As well as Ardenrun Hall, he had a flat at 50 Grosvenor Square in London's Mayfair and hosted legendary parties at both. Fellow Bentley Boys Bernard Rubin, Tim Birkin and Glen Kidston also had flats on Grosvenor Square and quickly established a 'Bentley Corner' for their parking needs. Barnato's country house guests included starlets from the West End musicals he invested in who were treated to impromptu races along his drive complete with faux pits serving champagne (his garage rarely held less than twelve cars). A frequent visitor to America, he was a regular on the Cote d'Azur too typically driving there in the latest Bentley (and famously racing the Blue Train back on one occasion).

According to Clare Hay's authoritative tome 'Bentley The Vintage Years 1919 - 1931', Captain Woolf Barnato is known to have been the original owner of just two normally aspirated 4½ Litre cars. The first - chassis ST3001 (or 'Old Mother Gun' as the Works nicknamed it) - was the 4½ Litre prototype that he co-drove to win the 1928 Le Mans 24-hours with Bernard Rubin, while the second - chassis NX3457 - is the car now on offer. 'Old Mother Gun' evolved into the Bentley Jackson single-seater Brooklands racer which featured a bespoke chassis and 6½ Litre engine. An accompanying copy of the Bentley's factory maintenance record shows that chassis NX3457 was built with 'Glacier lined steel shells fitted to conrods' and 'Vanden Plas Sports 4-seater - Our Own Body'. The numbers of its original engine and C-type gearbox are noted as NX3459 and 6545 respectively. The same document reveals that the 4½ Litre had '4 new Dunlop Fort Covers Fitted' during September 1929 and its clutch changed the following month. The guarantee for chassis NX3457 was transferred in November 1929 which was presumably when Barnato ceased to own it (the mileage covered during his stewardship being an indicated 9,860 or more).

Interestingly, chassis NX3457 was the first of the NX-series cars to be delivered in March 1929 (a month or two ahead of its siblings). The NX-series engines debuted a new type of more durable conrod design and it is entirely plausible that chassis NX3457 was used as a guinea pig. Barnato not only covered a far greater mileage (at higher speeds) than the average motorist but was also more likely to be understanding of mechanical failure. One of its sister cars, chassis NX3451, was built to 'Le Mans' specification by the Competition Department for William Berkley 'Bummer' Scott who raced it at the Irish Grand Prix and Brooklands (6-hour and BRDC 500-Mile) in 1929.

The ex-Barnato machine's next keeper is noted as Colonel J.F. Neilson of Pear Tree Cottage, Woodbridge, Suffolk and while we have been unable to establish whether they were one in the same person another Colonel J.F. Neilson acted as liaison to the newly formed Bolshevik army during World War One. Thereafter, the 4½ Litre is known to have belonged to - or passed through the hands of - Jack Barclay Ltd of Hanover Square W1, Walsh & Gillson Ltd of Bruton Place W1, Sir John Donaldson Hudson of the Adelphi Hotel, Liverpool (a partner in John Logie Baird Ltd), J. Rudd Esq of 'Arcadia', Bramhope, R. Taylor & Co Ltd of Lozells, Birmingham, William Landless Esq. of 'Norwood', Rossendale, James Bown Esq. of Stockport, Harry Faulkner Esq. of Stockport, Malcolm Holt Esq. of Cheadle Hulme, John James Pennington Esq of Gatley, Reg Parker of Nuneaton, William Loughran, Mr Whittaker (Isle of Man) and Leon Litchfield prior to entering the current ownership in September 2011.

Extensively restored by John James Pennington during the 1960s, chassis NX3457 was treated to a second thorough refurbishment some two decades later. Commissioned and overseen by Reg Parker, this more recent work included a mechanical rejuvenation by Wiltshire-based marque specialist Tony Townsend and the fitting of a new Vanden Plas-style 'Le Mans' body by H&H Coachworks of Henley, Oxfordshire. Pleasingly retaining its original registration number 'GU 1927' (issued during March 1929), the Bentley has been extensively recommissioned by the vendor. As well as an engine overhaul, the 4½ Litre has benefited from attention to its steering, brakes and suspension plus careful drivetrain alignment / balancing. The fettling has costs tens of thousands of pounds and taken hundreds of hours. The result is a W.O. Bentley with a pleasingly gentle patina and in rude mechanical health. Next year marks Bentley's Centenary and what better way to celebrate it than to acquire the 4½ Litre of marque saviour and three times Le Mans winner, Woolf 'Babe' Barnato?

'The best driver we ever had and, I consider, the best British driver of his day. One who never made a mistake and always obeyed orders . . . He won Le Mans three times running, an achievement no one else has equaled. He was a formidable man, behind a glass of whisky, behind a driving wheel, and behind a boardroom table. He enjoyed himself with Bentley Motors, enjoyed the racing and the status it brought him in the public eye. In spite of 1931, and the bankruptcy, ‘Babe’ and I never quarreled'