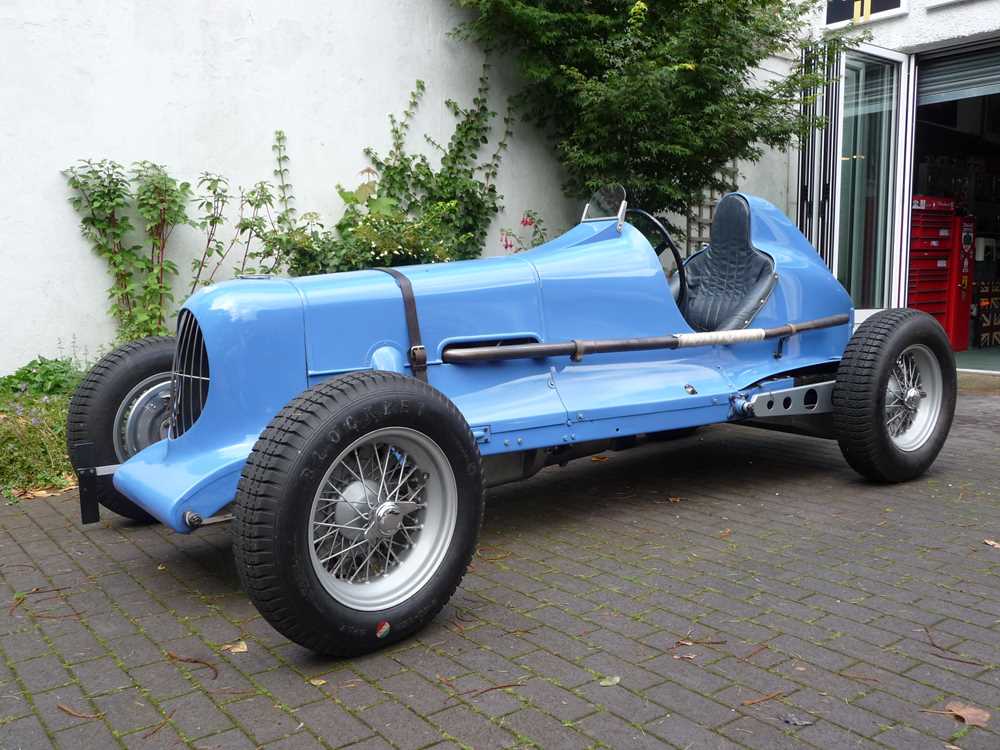 “In 1936 probably because of something to do with being bored in my daily round of common tasks, I felt an urge to do something positively constructive and the idea was born to build a racing car with which to have some fun.”

Born of this premise, work on what was to become the Stafford Special began in a shared mews garage in Denmark Villas, Hove in 1936. Working all and every evening for the next two years, Rodney Stafford (d.1981) sourced a Meadows 4ED 1500cc engine, which had proved itself in the racing Lea Francis team cars in 1929, mated to a Cozette supercharger, and then set about designing the rest of the car around it. A simple channel section chassis was constructed by Blaker Engineering Company and quarter-elliptic springs were made to run to the rear axle which was located by two sheet steel radius arms swiveling on ball mountings on either side of the cockpit. A solid axle shaft was made up by Laystalls, the crown wheel and pinion being of Poldi steel and constructed by Rogers Bros. Some 16lbs was trimmed from the flywheel whilst Sercks produced a special radiator using their highly efficient ‘Hell Cooler’ block. A Marendaz front axle suspended on semi-elliptic springs with conventional Hartford friction dampers was fitted together with a Marles steering box mounted on the offside of the chassis giving 2.5 turns lock-to-lock. Fuel was located in a rear tank of seven gallons capacity pressurized by a hand pump. The “brilliant light blue” bodywork was entrusted to a Mr. Davis who “made a perfectly marvelous job” of producing the svelte panels in 20-gauge aluminum.

After a few test runs and speed trial events in 1937 including one at Lewes, it was realized a few modifications would be needed to make it truly competitive. Domed high compression magnesium alloy pistons were sourced from Martlets and the blower was overhauled to give around 15lbs of pressure. The front axle was replaced with a Rover unit allied to Riley 9 wheel carriers and brakes. The car sat lower and was found to be “considerably more potent”, handling and stopping “magnificently”. Indeed, during practice for a 1938 race on the Campbell Circuit at Brooklands the car was able to hold a 3.3 Bugatti, 2-litre Alta, and 1500 Maserati at bay initially. Unfortunately, the infamous handicapping system worked against them in the event!

Sadly, the outbreak of hostilities in 1939 put an end to any further racing and development and the car was laid up for the duration of the war. Shortly after peace returned, complete and running, it was bought from Sportscar Garages, Ripley, by John Colborne-Baber who would later become well-known for his Volkswagen dealership based in the South of England. He completed with the car in events at Prescott, Weston-super-Mare, and the Brighton Speed Trials, before selling it on to Richard Shakespeare in 1951. His wife enjoyed some success in the car before it passed through the hands of a number of others, including Sir David Gamble (1951), Murray Beacroft (1953), John Grice (1963), and Tony Mitchell (1971), gradually becoming more tired as the years went by, before being purchased (minus its engine) by Riley enthusiast Tim Ely in 1972. In 1990, the remains were swapped for a new VW Golf GTi with Peter Colborne-Baber - the son of the second owner. The car sat for the next few years until the decision was taken along with Works Manager and racing driver, John Markey, to rebuild it to as near as possible original specification. Because of the numerous Riley parts fitted they offered the project to Ian Gladstone of Blue Diamond Services. It was discovered that Blakers still existed and they straightened the chassis whilst a Riley Merlin open prop shaft rear axle, with a similar track to the original, was fitted. As many of the original parts as reasonably could be were used in the rebuild including the radiator, fuel tank, and dashboard. The original engine had by now been reunited with its chassis so a replacement was sourced by Bill Roberts along with a gearbox. These were overhauled and a Cozette supercharger was built up and installed. As the original aluminum bodywork had started to powder a replacement was crafted by Lawrence Kett of G&A Fabrications of West Molesey, Surrey, this being painted by Andy Coxhead of 355 Ltd.

Upon completion, the car ran in various VSCC events including a Brooklands Sprint, Goodwood Sprint, and Shelsley Walsh whilst also making an appearance at the Chateau Impney Hillclimb in 2015. Despite not having been campaigned recently it is said to be “on the button” and in lovely order. This historic special is accompanied by a wealth of information including correspondence, specification sheets, numerous photographs, drawings, and a VSCC Eligibility Document dated 2005. It is now available for inspection prior to the auction – please contact the office to arrange.