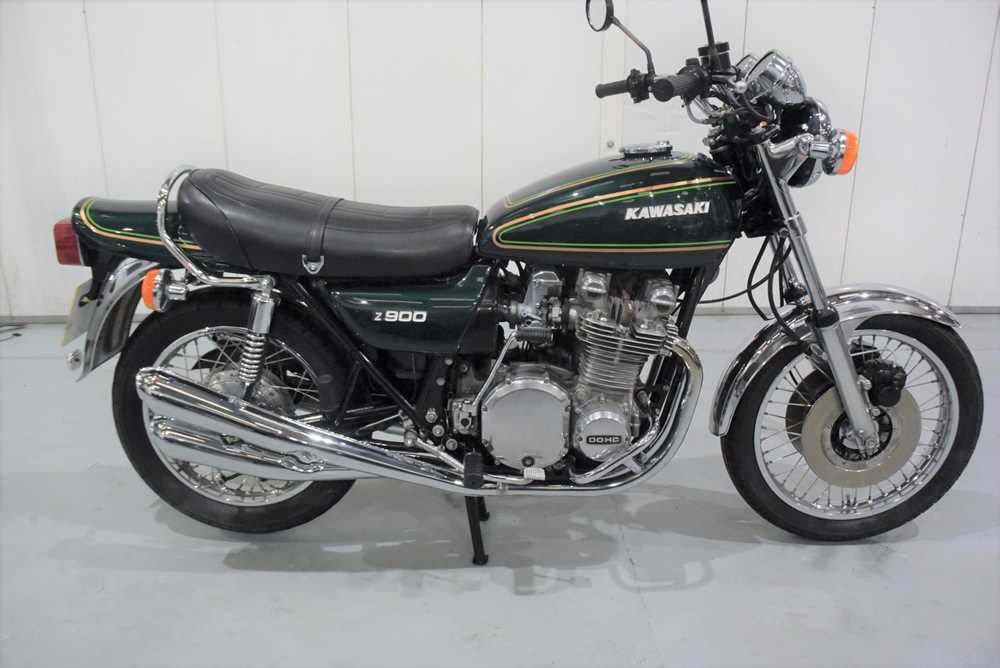 Kawasaki Heavy Industries is one of the largest corporations in Japan producing a wide range of products from rolling stock to ships. After taking over the ailing Meguro Motorcycle Company they began manufacturing motorcycles under the Kawaski name in the early sixties, first continuing development of the K1 BSA A10 copy but soon moving on to build a reputation for high performance 2 stroke twins and triples. In the early 70s the four stroke four cylinder Z1 was initially developed as a 750cc to compete with the new Honda SOHC 750 but Kawasaki held the bike back until it could be increased in capacity to set a new benchmark for superbike performance. With its DOHC 900cc engine offering a top speed of over 130mph it easily became the fastest mass produced bike in the world.

This Z900 was restored a number of years ago and comes with a number of old MOTs and receipts for over £4500, mainly with Z Power, spent on the bike in the late 90s. A nice authentic restoration that has kept the bike as original as possible including the distinctive 4 into 4 chrome exhaust system stamped 'KHIZ1/750Z2 DGM30380 S 76'. The bike has been stored in a heated garage as part of a large collection of 70s/80s Japanese classics and has not been run for a number of years so will need a good recommissioning, battery, brakes, carbs, fuel tank clean etc.