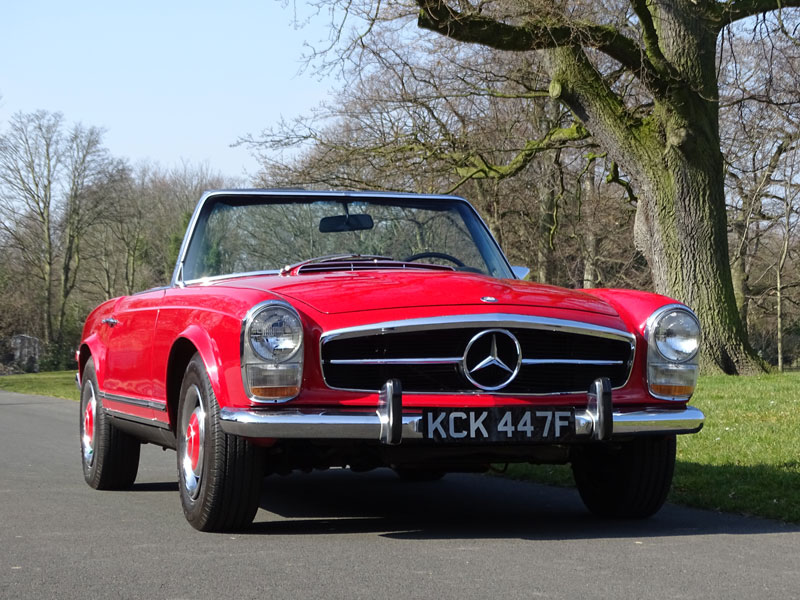 Ever since the landmark 300SL was unveiled in 1954, Mercedes have produced an SL (Sport Leicht) model or range of models. The similarly styled, but mechanically unrelated, 190 followed in 1955, completing the first generation of cars. It was succeeded by the W113 Series, the rarest variant of which, the 250SL, was officially introduced at the March 1967 Geneva Salon. Blessed with effortlessly elegant Paul Bracq styling, it was powered by a new SOHC straight-six engine. Suspension was independent all-round while braking was by power-assisted discs on all four corners, and steering by power-assisted recirculating ball. The majority of 250SLs were specified with four-speed automatic gearboxes, and many were ordered in 'Coupe Convertible' guise, that came with both a soft-top and the famous 'Pagoda' hardtop roof. Faster than the 230SL yet more stiffly-sprung and agile than its 280SL successor, the 250SL remained in production for just a single year, accounting for a mere 5,196 sales worldwide, more than a third of which were exported to America.

This smartly-presented left-hand drive SL was first registered on January 1st 1968 and specified with both power steering and automatic transmission. Relatively little is known about its history other than it was owned by a Mrs Kathleen Hack of Michigan USA from December 4th 1989 until purchased by the vendor and UK registered as 'KCK 447F' last year. At some stage the Benz has been upgraded by the replacement of its original 2.5-litre engine by a 2.8-litre one from a period 280 SE. The car is resplendent in Red matched to a Black leather interior and currently displays 102,935 miles. The vendor presently classes the Pagoda's straight-six engine, automatic gearbox and interior as 'excellent' and the two-door bodywork and paintwork as 'very good', and is offering the car complete with fresh V5 and both hard and soft tops.
Share: