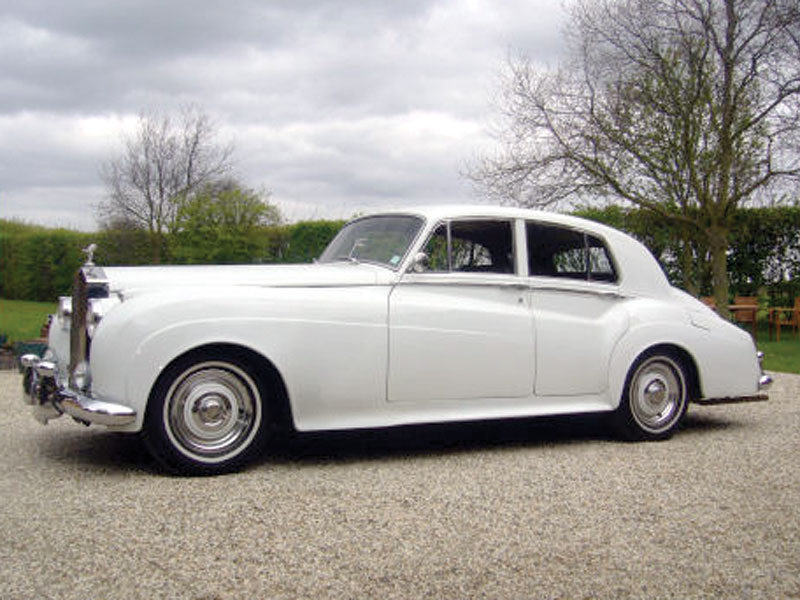 Typifying the growing economic confidence of the mid 1950s, the Bentley S1 was larger, faster and more boldly styled than its MKVI predecessor. Introduced in 1955, there was nothing average about its 'Standard Steel Saloon' bodywork. A masterclass in formal elegance, it was underpinned by a new cruciform-braced box-section chassis equipped with independent coil-sprung front suspension, a 'live' rear axle and servo-assisted four-wheel drum brakes. Powered by a twin SU carburettor fed 4887cc straight-six engine allied to standard-fit four-speed automatic transmission, the S1 could waft along at over 100mph. Once affectionately described as "a veritable country club on wheels", the model certainly boasted an inviting cabin. Trimmed with the finest hides, carpets and wood veneers, it promised relaxation and contentment.

Finished in Porcelain White with Dark Green leather upholstery, this particular example has been made to resemble one of its badge-engineered siblings; a not uncommon identity transformation in times gone by when the 'Winged B' enjoyed a less exulted status. Indeed attempts to convince onlookers that 'SWU 880' is a Rolls-Royce Silver Cloud rather than a Bentley S1 are understood to extend to the famous RR logo appearing on its engine rocker cover. Describing the car's bodywork, chromework and paintwork as "good", the vendor further comments that it "runs and drives well with a quiet engine, automatic gearbox and rear axle". Though, he feels that the luxury saloon's best feature is its "completely re-trimmed interior". Apparently carried out to a high standard, work included the fitting of a fresh headlining and recovering the door panels as well as renewing the leather upholstery and carpets. Riding on steel wheels, this handsome and imposing 'Rolls-Royce' is offered for sale with MOT certificate valid until March 2011.
Share: