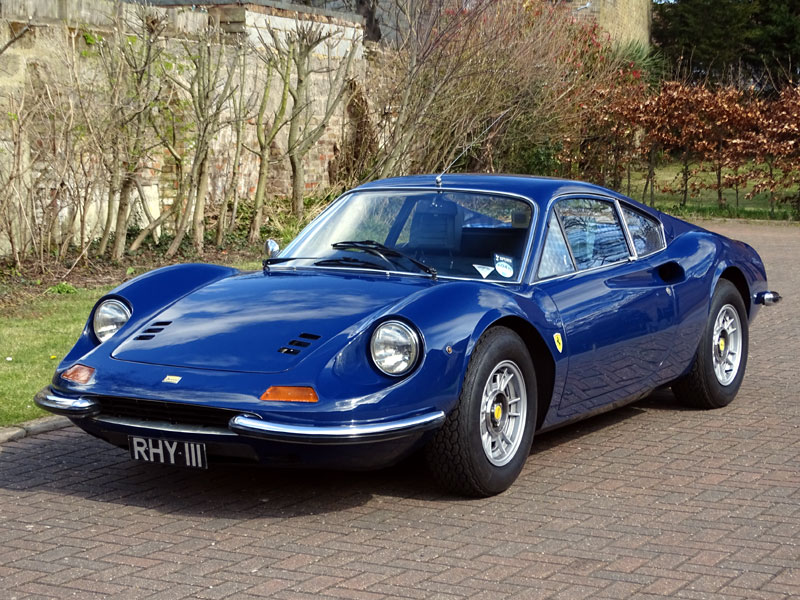 - First owned by a member of the Rothschild family

Heavily influenced by the Dino 206 GT Berlinetta Speciale concept car (a thinly disguised 206 S sports racer) which Pininfarina had unveiled at the 1965 Paris Salon, the roadgoing Dino 206 GT debuted in Turin two years later. Compellingly curvaceous and bodied in aluminium over a tubular steel chassis frame, it seemed a fitting tribute to Enzo Ferrari's late beloved son Alfredino. Boasting all-round, independent double-wishbone suspension, Koni shock absorbers, anti-roll bars and four-wheel disc brakes, the newcomer was the first Maranello production design to feature either rack-and-pinion steering or a mid-mounted engine. Although, the 1987cc 'quad-cam' unit in question was the work of Franco Rocchi, its inspiration came via Alfredino and the legendary Vittorio Jano (who between them had convinced Enzo Ferrari of the inherent engineering merits behind a compact V6 as early as 1956). Developing a quoted 180bhp at 8,000rpm, the free-revving powerplant was allied to five-speed manual transmission and promised a 140mph plus top speed.

However, despite sensational looks and inspired, race-bred handling, the announcement of an even faster variant at the March 1969 Geneva Motor Show saw 206 GT production cease in August 1969 after just 152 cars. Thankfully, its successor - christened the 246 GT on account of its larger 2418cc engine - retained the same sublime Pininfarina styling (albeit draped over a 60mm longer wheelbase). With a quoted 195bhp and 166lbft of torque on tap, it was reputedly capable of 151mph and 0-60mph in 6.8 seconds. To ease manufacture, the revised two-seater utilized a cast-iron cylinder block and steel bodywork. Inheriting its forebear's cabin architecture complete with steeply raked bucket seats, aluminium fascia, suede-topped dashboard and 'chrome fingered' transmission gate, the model typically rode on Cromodora 'bolt on' alloy wheels. Phased in around mid-1971, the final Series III or Tipo E Dino benefited from revised gear ratios and a different fuel supply system (though, little else was changed). Regardless of Series / Tipo designations, just 488 right-hand drive 246 GTs are thought to have been UK supplied.

The tidy-looking right-hand drive example we are delighted to offer here is finished in an attractive shade of Blue Scuro and has had just four keepers from new, one of whom has owned it twice and for a total of over 30 years. It is understood to have been bought new in March 1972 by a member of the Rothschild family. He retained it until 1977, at which point the title passed to a Richard Hughes of Oving near Aylesbury. The vendor first acquired the Ferrari in 1982 and used the Prancing Horse as his daily driver until selling it to a Kim Bowerman in 1989. It was during Bowerman's tenure that a considerable amount of refurbishment was apparently carried out by renowned marque specialist Rardley Motors of Hindhead - this is understood to have included a complete respray, Connollising of the Pale Blue hide interior and a lead-free conversion to the V6 engine. The vendor re-purchased the car in 1994, since when it has been used sparingly and still only displays a total of 63,888 miles. 'RHY 111' was treated to a new Lucas battery only a few weeks ago and the vendor currently classes the bodywork, paintwork, interior trim, engine and five-speed manual transmission as all being in 'good' order. He is offering the Ferrari complete with a raft of general paperwork and old V5s, tax discs and MOTs, plus the current V5C and a current MOT valid until July 15th; also a copy of the April 2008 edition of Classic & Sports Car for which 'RHY 111' graced the front cover and appeared inside as part of a feature article.
Share: