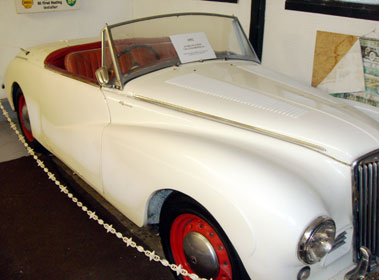 The Alpine, immortalised on the big screen in the 1955 Cary Grant and Grace Kelly movie `To Catch a Thief', was initially developed by Sunbeam-Talbot dealer George Hartwell of Bournemouth. Launched in 1953, it was the first car from Sunbeam-Talbot to bear the Sunbeam moniker alone since the 1920 merger of Sunbeam, Talbot, and Darracq, and was named by Rootes competitions manager Norman Garrad who was heavily involved in the Sunbeam-Talbot successes in the Alpine Rally during the early 1950s using the saloon models. The Alpine was derived from the surprisingly fleet Sunbeam-Talbot 90 Saloon, using the same 2267cc four-cylinder engine but with raised compression ratio. In the 1953 Alpine Rally four Alpines won the Coupe des Alpes, one of which a young Stirling Moss drove to 6th place, while Sheila Van Damm won the Coupe Des Dames.

As well as the elegant, long-tail two seater design, hand built at Thrupp & Maberly, the art-deco interior of these cars is a delight, and this one seemingly retains all its original features including column shift, many having been converted to floor changes. From 1954 an overdrive unit became standard. Most of the 3000 Alpines Mark I and Mark III (no Mark II was made) built were exported, primarily to the USA, and perhaps only 200 remain today.
This car has a V5C, V5 and buff logbook, and was last registered on March 1st 1984, though it is believed to have driven into the collection building under its own power. Complete but in need of restoration, it has spent a number of years as a static exhibit and therefore is sold strictly as seen.
Share this page: