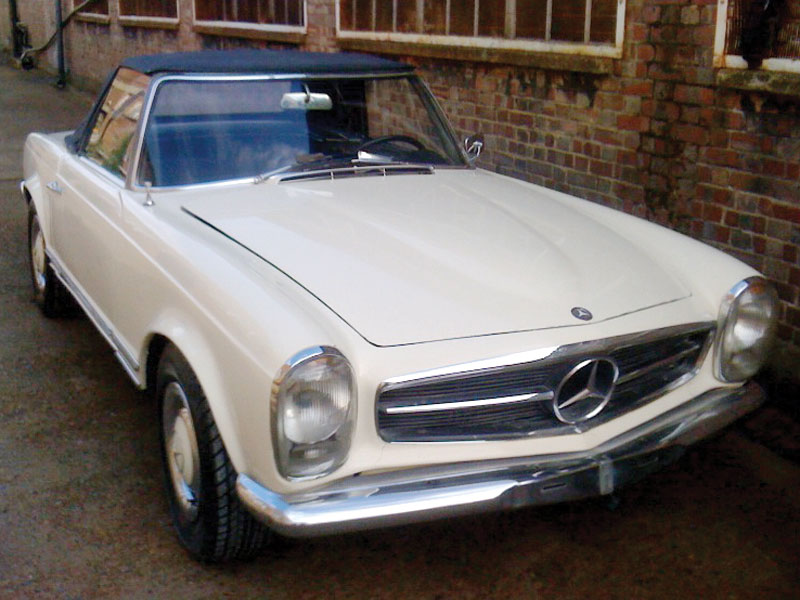 Successor to both the exotic racebred 300SL 'Gullwing' Coupe and its humbler 190SL sibling, the W113 series SL proved more comfortable than the former and faster than the latter (a point emphasised by Eugen Bohringer's 1963 Liege-Sofia-Liege rally victory). First of the line, the 230SL was introduced at the March 1963 Geneva Salon. Designed by Paul Bracq, its wonderfully crisp styling clothed a monocoque chassis equipped with all-round independent suspension (wishbones and coil springs at the front and coil sprung swing axles at the rear) and servo assisted disc / drum brakes. Powered by a 2306cc straight-six engine mated to either four-speed manual or automatic transmission, the model was credited with 150bhp and 159lbft of torque. Reputedly capable of some 124mph, the svelte roadster was universally praised by the contemporary motoring press for its performance, roadholding and refinement. Available in Californian Coupe, Convertible or Coupe Convertible guises, the last of these came with both a soft-top and the famous 'Pagoda' hardtop roof - so called because of its gently scalloped centre section. Most of the early cars were of this type. The build quality of the W113 range is much admired to this day and Mercedes certainly didn't stint on solidity. As a result, the cars were heavier than most of their peers, despite the use of aluminium for the boot lid, bonnet and door skins. Of the 48,912 W113 Series cars made between 1963 and 1971, 19,831 were 230SLs. The W113 Series was replaced by the all new R107 range.

The left-hand drive 1964 Mercedes-Benz 230SL on offer sports White coachwork allied to a Blue interior. Imported from America, we are informed that all relevant taxes and duty have been paid and a V5C Registration Document applied for. It is currently in soft top guise, but has a hard top that's still in the USA, which can be bought by separate arrangement. The museum regard the car as "good, honest and solid" but volunteer it would need a "complete overhaul to make it perfect". It comes with a fresh MOT certificate.
Share: