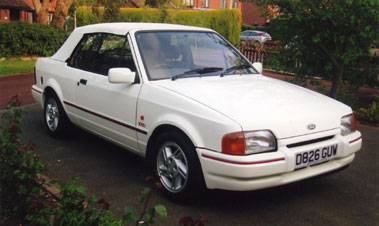 Introduced in 1983, the Escort Cabriolet in both XR3i and Ghia specifications was Ford of Europe's first convertible since the Corsair of the 1960s. Based around a suitably reinforced monocoque chassis, the drop-top conversion was engineered by German coachbuilder Karmann. An elegant design with a surprisingly practical boot, it featured the same all-round independent suspension (McPherson strut front / transverse arm rear), rack and pinion steering and disc / drum brakes as its hatchback siblings. Powered by a fuel-injected 1597cc SOHC four-cylinder engine allied to five-speed manual transmission, the XR3i Cabriolet was reputedly capable of nigh-on 120mph. Proving the more popular model (to the extent that the Ghia version was dropped after a couple of seasons), it re-emerged in facelifted 'MKIV' guise during 1986. Visually distinguished by a subtle rear spoiler, bumper inlays and turbine-style alloy wheels, it could be had with such advanced options as ABS brakes and a heated front windscreen.

Finished in white with grey cloth upholstery piped in red, this particular example is variously described by the vendor as being in "good" (engine, five-speed manual gearbox, electrical equipment), "above average" (wheels / tyres), "exceptional" (bodywork, paintwork), "excellent" (chassis) or "almost perfect" (interior trim) order. First registered on January 1st 1987, 'D826 GUW' is said to have covered just 72,000 miles from new (a figure apparently substantiated by its retention of a "Full Service History" and "most MOTs" as well as a "number of bills"). Due to the Escort reportedly being "dry used only and SORN'd over the winter months for the last few years", the seller considers it to be in "exceptional and original condition". Though, he notes that there are "two small indentations / marks to the bonnet and a minute chip in the windscreen's left-hand side". An appealing proposition, this smart XR3i Cabriolet is offered for sale with MOT certificate valid until June 2008.