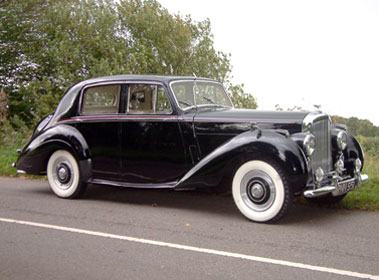 An obvious evolution of its MKVI predecessor, the Bentley R-type was introduced at the 1952 Earls Court Motor Show. Subtly reworked by in-house stylist John Blatchley, it boasted a notably larger boot and reprofiled rear wings. Switching from riveted to welded frame construction at chassis B349TO, the newcomer featured independent coil-and-wishbone front suspension, a leaf-sprung 'live' rear axle and servo-assisted four-wheel drum brakes (hydraulic front / rod rear). Powered by a 'big bore' 4566cc straight-six OISE engine allied to either four-speed manual or automatic transmission, the R-type was a surprisingly strong performer. Praised by the contemporary motoring press for its high speed handling and well appointed interior, the model remained in production until 1955 by which time some 2,320 are thought to have been made.

This standard steel saloon was supplied new to J. Boneham Esq by the Portland Motor Company on 13th August 1954. The car's build sheet shows that it was originally finished in Masons Black with beige leather upholstery and matching carpets, the same livery it wears today. Equipped with automatic transmission, the Bentley left these shores many years ago to enjoy a warmer life on the west coast of America where it resided till fairly recently. Hailing from Concord California, the R-type's last owner spent the equivalent of £10,000 having it fettled in 2008 and these bills remain on file. Riding on whitewall tyres and sporting its old UK number plates, the saloon is offered for sale with its former US Certificate of Title and a C&E 386 form proving that import duty was paid upon its return to the UK. Given the presence of the latter two documents plus the support available from both the Rolls Royce Enthusiasts' Club and Bentley Drivers' Club re-registering the R-type in this country will prove a straightforward process.
Share: