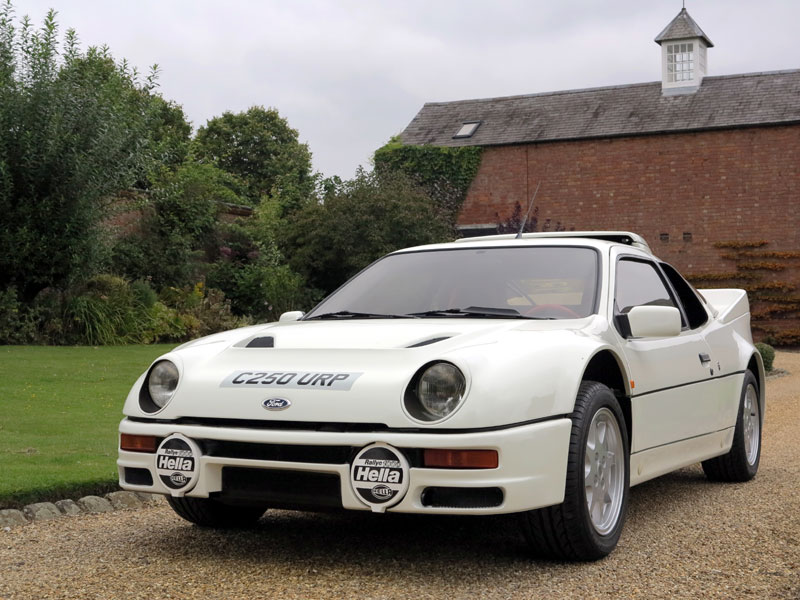 Conceived purely as a Group B rally car, the Ford RS200 was unveiled at the November 1984 Turin Motor Show. The work of ex-F1 designer Tony Southgate and ex-F1 engineer John Wheeler, its advanced chassis incorporated a central aluminium monocoque cell atop a steel platform with detachable subframes fore and aft. Suspended by double wishbones and twin-coil over shock absorbers, each wheel was fed power by a highly sophisticated Ferguson Formula (FF) system. Using a combination of three viscous couplings and a centre diff lock etc, it allowed the torque split between the front and rear wheels to be varied on the move (though, this facility was disabled on road-going variants). Powered by a mid-mounted turbocharged 1803cc four-cylinder BDT engine, the RS200 carried its five-speed gearbox up front. While, this arrangement necessitated two propshafts, it also contributed to the car's excellent weight distribution.

Clad in Ghia-styled but Reliant-built 'clamshell' glassfibre bodywork, a delay in production meant that homologation was not granted until February 1986 (although, Ford claimed to have built the necessary 200 cars by then most sources put the number actually completed at around 148). Managing a highly credible third overall on its Swedish Rally debut, the RS200 had yet to fulfil its potential before Lancia Delta S4 driver Henri Toivenen's death on the 1986 Tour de Corse prompted Ford's instant withdrawal and FISA's decision to ban Group B. Determined to recoup some of its £10,000,000 investment, the Blue Oval enlisted the help of Tickford to convert circa ninety or so RS200s to road-going specification. Detuned but still reportedly capable of 140mph and 0-60mph in 6.1 seconds, these street-legal supercars could be had in either left- or right-hand drive. Priced at approximately £50,000 each, they were sold to collectors worldwide.

First owned by Jeff Elghanayan of California, chassis 00135 was to remain in his care until 2009 when it was acquired by noted collector Steve Rimmer. As well as having the Ford returned to its original white livery, the latter entrusted it to renowned rally preparation specialist Bill Gwynne Motorsport Ltd for a thorough chassis, bodywork and mechanical checkover / refresh. Surplus to requirements by the time work was completed, the RS200 was briefly registered to Ian Gwyne of BGMsport prior to entering the current (third) ownership in December 2012. Part of a private rally car collection for the past three years, it is understood to have covered circa 350 post-refurbishment miles and to boast a 350bhp performance pack (upgraded injectors, ECU / engine map, fuel pump etc). Showing just 11,400 recorded miles, 'C250 URP' is rated by the vendor as follows: 'excellent' (bodywork, paintwork), 'no known issues' (engine, gearbox, electrical equipment) and 'very good, light scuffing to driver's seat and other minor marks' (interior trim). He further informs us that the Ford is undergoing a mechanical service and general health-check at Roger Clark Motorsport in Hinckley (Goodwood FoS hillclimb winners 2015) ahead of the auction. Offered for sale with V5C Registration Document, 'no advisories' MOT certificate valid until April 2016, sundry paperwork and copy of 'Ford RS200: The Story So Far' by Justin Smith.
Share: