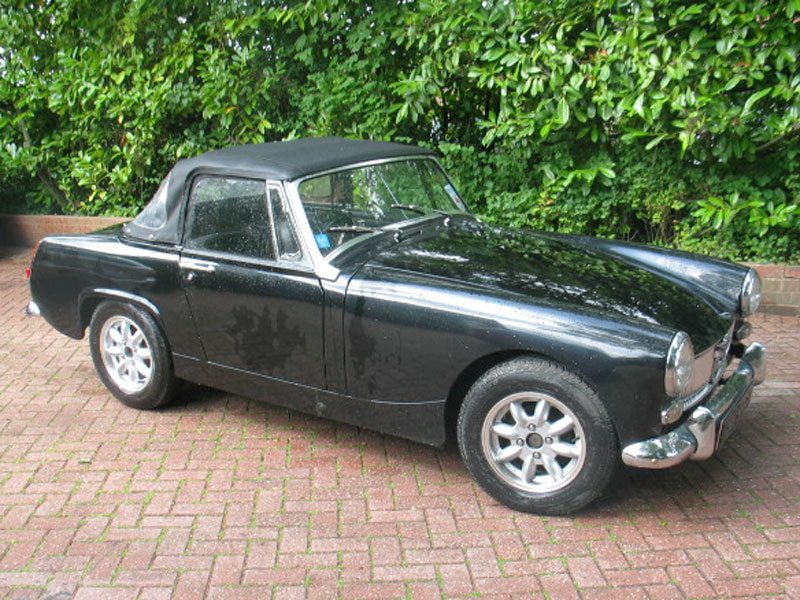 The iconic model name of 'Midget' reappeared, on an MG in 1961, and was effectively an updated, restyled, version of the Austin-Healey Sprite, a small A-Series engined sports car which had been in production at Abingdon since 1958. Except for its badging and trim, the new and compact, two-seater, Midget was the same as the latest (Mk II) Sprite. The re-introduced Midget was built around a solidly-engineered steel monocoque body-chassis unit, a strict twoseater in a very compact cabin. A soft-top was standard, but a removable hardtop (not fitted to this car) was optionally available, as were centre-lock wire-spoke wheels. In any or all of its guises, this taut-handling sportscar was always a best-seller in the MG range until the last cars were built in 1979. The first Midgets had 46bhp / 948cc, but from 1966 this had grown to 65bhp / 1275cc, and guaranteed a top speed of nearly 95mph. In eight years, no fewer than 114,000 1275cc Midgets (and nearly 22,000 closely related Sprites) were produced. Following this and to meet the latest North American safety and exhaust emission legislation, the 1975 model was equipped with big black polyurethane bumpers at front and rear, along with a 66bhp Triumph-based 1493cc engine. Thus known as the Midget 1500, this was the first, and only, Midget to offer a top speed of more than 100mph. In five years, 1974 to 1979, a total of 73,899 Midget 1500s were manufactured. Then, and in later years, parts and service back-up was excellent, which explains the number of classic Midgets still in existence.

This particular example, first registered in 1970 is one of the more sporting 1275cc engined variants. Reportedly treated to a full restoration over the last decade, 'UBN 560J' was treated to a 'new' bodyshell & since then has apparently undergone an engine overhaul, as well as reconditioning work to its suspension and uprated servo-operated brakes. This sporty two seater further benefits from a recent set of Minilite alloy wheels & a mohair hood & is widely described as 'excellent' throughout; this inexpensive soft-top is offered for sale with MOT certificate valid until July 2012.
Share: