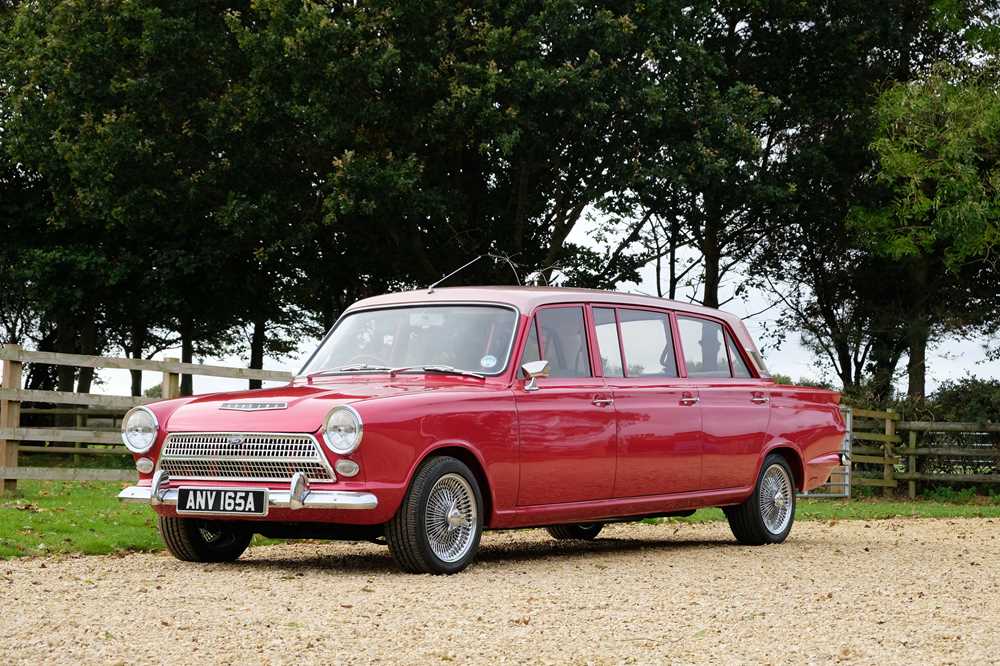 The Cortina, aimed at buyers of the Morris Oxford Farina and Vauxhall Victor, was launched on 20 September 1962. The car was designed to fill a gap between the smaller Anglia and executive Zephyr/Zodiac models, with the aim being that it should be economical to buy, cheap to run, and easy and inexpensive to produce in Britain . The front-wheel drive configuration used by Ford of Germany for the new Ford Taunus P4, a similar-sized model, was rejected in favour of traditional rear-wheel drive layout. With its lightweight shell and nimble handling, it was a great success, being produced in 5 generations over a period of 20 years until 1982.

Commissioned in 2009 and created by Mario Tripicchio. Here offered is a unique MK1 Cortina Limousine. Benefiting from 2ft added to the wheel base, the Interior makes use of MK2 1600E Cortina seating featuring bespoke door panels. ANV 165A is mated to a Ford 2.8L V6 Cologne engine paired with an automatic gearbox and features American Chrome wire wheels with Knock-on spinners, disc brakes with front vented discs, coilovers and a bespoke twin pipe Powerflow exhaust.

Following its completion, the car was shown in 2010 at the MK1 Cortina National Show and won the ‘Best Modified’ Class, with display at the NEC Classic Car Show soon to follow. In 2018, the car benefited from works at Classic Workshop Ltd including replacement fuel lines, bespoke uprated heater matrix pipes and adjustment to the propshaft, as well as 4 new tyres. The car was also subject to a gearbox overhaul in October 2019 at a cost of £2154. ANV 165A comes accompanied with a folder including the V5 document, a number of previous MOTs and invoices and of course, a bottle of champagne and two glasses.