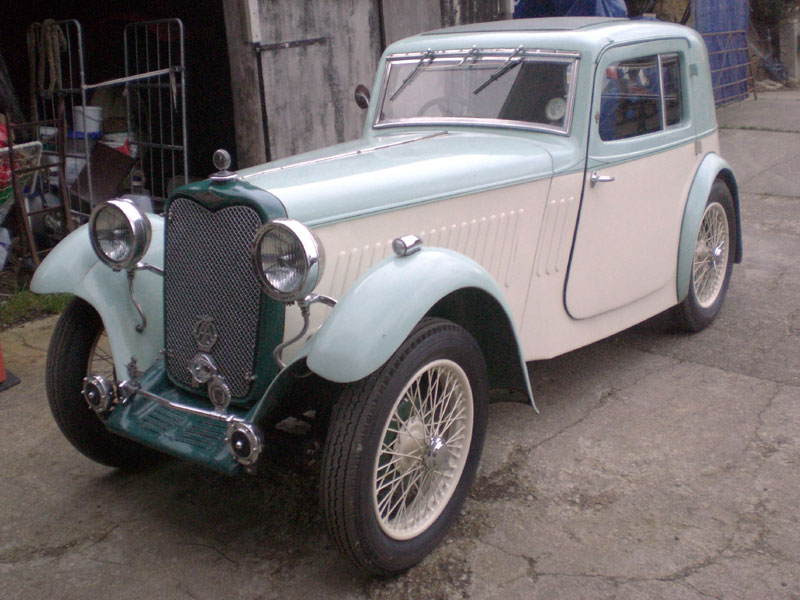 Arguably Singer's first true performance offering, the 'Nine' Sports was unveiled in July 1932. Looking every inch the 1930s sportscar thanks to the efforts of stylist Eric Neale, its rakish bodywork was underpinned by a robust ladder-frame chassis that featured all-round semi-elliptic leaf-sprung suspension, adjustable Andre-Hartford friction dampers and four-wheel hydraulic 10-inch drum brakes. Uprated via an increased sump capacity, standard cooling fan and twin SU carburettors, the newcomer's 972cc OHC four-cylinder engine developed some 31bhp @ 4,600rpm and was allied to a close-ratio four-speed manual gearbox. Reputedly capable of 66mph and sustained 50mph cruising, the 'Nine' Sports soon acquired an enviable competition pedigree. Not content with the eight premier awards it won during the Christmas 1932 London to Exeter run, the following season saw the model distinguish itself on the Monte Carlo Rally, London-to-Edinburgh Trial and Alpine Six-Day Trial. However, its crowning achievement came at that year's Le Mans when the mildly tuned version driven by Barnes and Langley became the first unsupercharged sub-1000cc British car to qualify for the Rudge-Whitworth Biennial Cup. Launched in open four-seater tourer guise, the `Nine' Sports could also be had as a two-door fixed head coupe from 1933 onwards. An elegant design, the enclosed car drove with much the same verve and agility as its less weather-proof sibling. Though, with two seats rather than four and a higher price tag, the `Nine' Sports Coupe was not as popular.