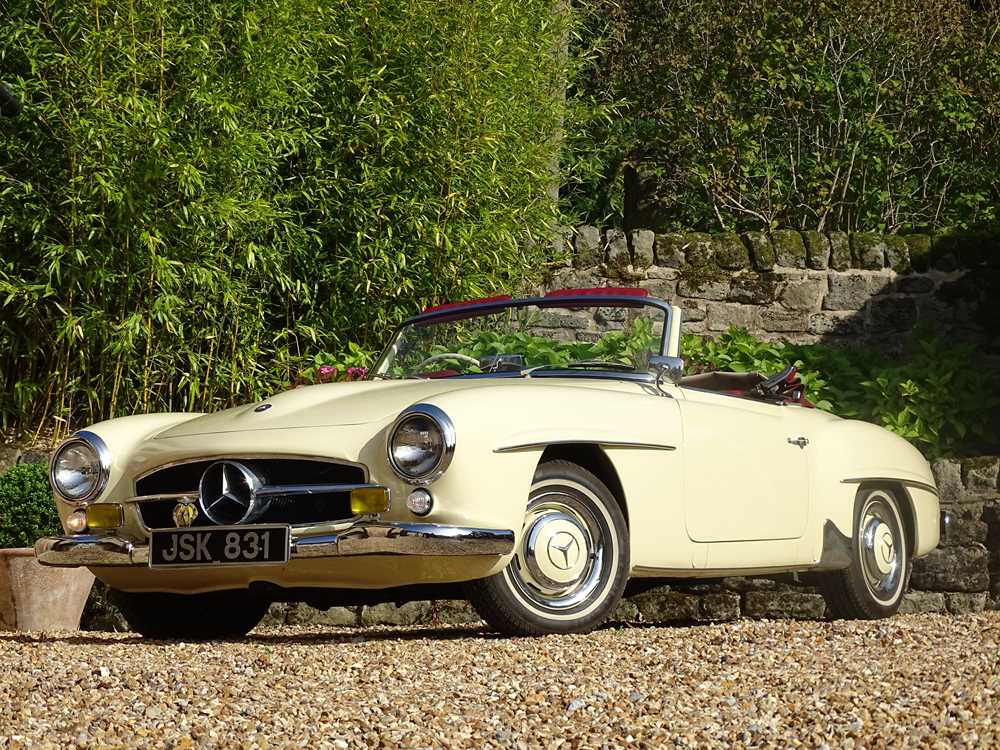 ‘JSK 831’ is one of just 150 190 SLs imported to the UK in 1960 and one of only 562 righthand drive examples all told. It is believed to have been first registered in the Isle of Man as ‘591 COL’, and is known to have spent two years of its life in the sun of California under the care of a Doctor Freeman. It was in October 1991 that it returned to the UK and acquired the registration ‘JSK 381’, the one it still wears today. Eight years later it became the subject of a comprehensive two-year restoration project carried out by the Mercedes-Benz approved company the Chandler Stewart Bodyshop Group. As many of the original parts were retained as possible and duly reconditioned, while genuine Mercedes-Benz replacement parts were sourced where required. The bodywork was lead loaded where needed and finished in the Benz’s original colour of Ivory, which is suitably complemented by the Red leather interior trim and Dark Red mohair hood. The odometer currently displays a credible 65,392 miles and the vendor presently considers the car’s bodywork, paintwork, interior trim, straight-four engine and four-speed manual transmission to all be in ‘very good’ order. It is now being sold complete with numerous old receipts and MOTs, bills for recent works, owner’s manual, dealer parts book and an extensive collection of images of the restoration.

The 190 SL was introduced in 1955, at which point the graceful new two-door convertible grand tourer was sold alongside the road-going version of the 300 SLR – the 300 SL - whose styling it strongly resembled. In fact, the underpinnings of the two cars were quite different and, while the 300 SL had a purpose-built tubular spaceframe (W198), its smaller sibling was built on a shortened version of the ‘Ponton’ saloon (W121) platform, and so was of monocoque construction.