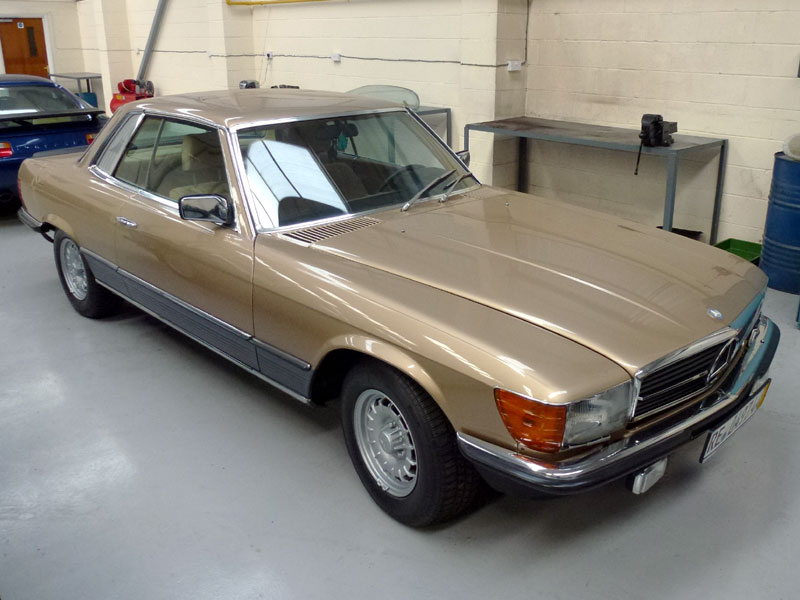 Beginning in March 1980 and ending the following year, production of the Mercedes-Benz 500SLC amounted to just 1,133 cars. Utilising a stretched version of the R107-series convertible platform, the four-seater's extra length was disguised by the louvered sail panels that adorned its rear three-quarter windows etc. Equipped with all-round independent suspension, power steering and four-wheel disc brakes, it proved a comfortable and refined grand tourer. Predominantly allied to automatic transmission, its 4973cc SOHC V8 engine developed a quoted 240bhp and 296lbft of torque. Reputedly capable of over 134mph in standard tune, Stuttgart's flagship coupe enjoyed a highly successful second career as a rally car.

The left-hand drive, German-registered 500SLC being sold features Champagne Metallic over Dark Grey Metallic paintwork and an interior trimmed in Tan-coloured velour. It was acquired by the current owner from Perth, Scotland in October 2005, where it had formed part of a private collection. It was treated to new brake discs and pads, Waxolying of the underside, a retrimmed parcel shelf and the fitment of stainless steel Mercedes sill plates in 2006, prior to being professionally laid up in 2007. The big Benz is now offered complete with sunroof and history file containing: certificate of title, owner's manual, service book, and assorted bills and old MOTs. The car currently registers an unwarranted 128,900 kilometres and is being sold at No Reserve.
Share: