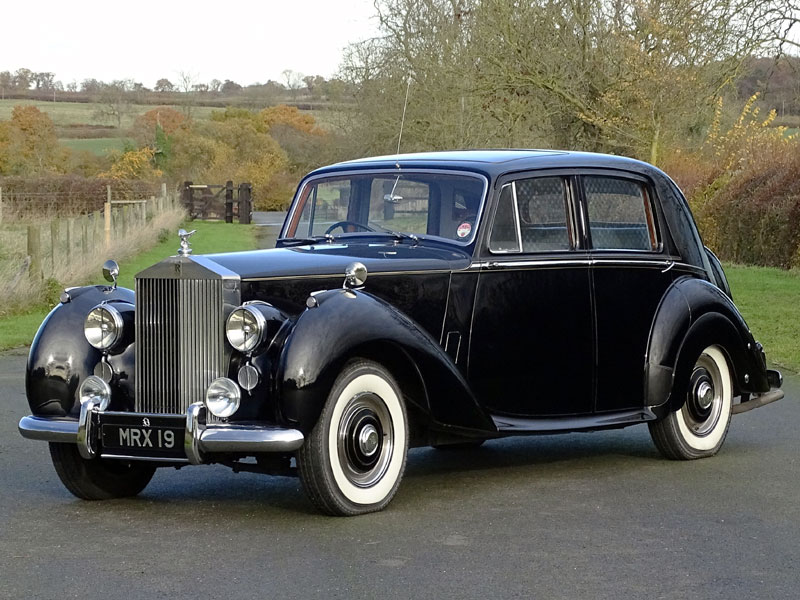 Unveiled in 1949, the Silver Dawn had the distinction of being the first Rolls-Royce to wear standard steel coachwork. Visually and mechanically indebted to its Bentley MKVI stablemate, the newcomer was powered by a 4257cc straight-six engine allied to four-speed manual transmission. Capable of over 90mph, the luxuriously appointed four-door saloon gained a larger 4566cc powerplant during 1951 and the option of four-speed automatic transmission the following year. Suspension was independent at the front and by live axle on semi-elliptic leaves at the rear. Braking was by servo-assisted drums all-round. A total of just 761 Silver Dawns had been manufactured by the time the model was supplanted by the Silver Cloud.

Offered for sale with clear title by order of the High Court, this particular example has formed part of an extensive London-based private collection since 10th April 1989. Understood to be one of just 170 4.25-litre Silver Dawns made, chassis SFC 82 was delivered new to J. Plunkett Esq. during November 1951. Completed over four decades later, a handwritten valuation form on file claims that `The engine, gearbox, rear axle, suspension and brakes have all been overhauled . . . Vehicle has one owner from new and then myself . . . During the course of nine years it cost me over £39,000 just to restore the car with original parts'. Accompanying invoices and estimates suggest that The Bentley Service Centre of Nine Elms and The Chelsea Workshop undertook at least part of the refurbishment. Starting readily upon inspection, the Silver Dawn's last major service (a 24,000 miles `C' schedule one) appears to have been carried out by The Chelsea Workshop at a cost of £6,102.42 during May 2013 (less than 200 miles ago). An HPi check reveals that the Silver Dawn is not recorded on their stolen, finance, security watch or insurance write off databases.
Share: