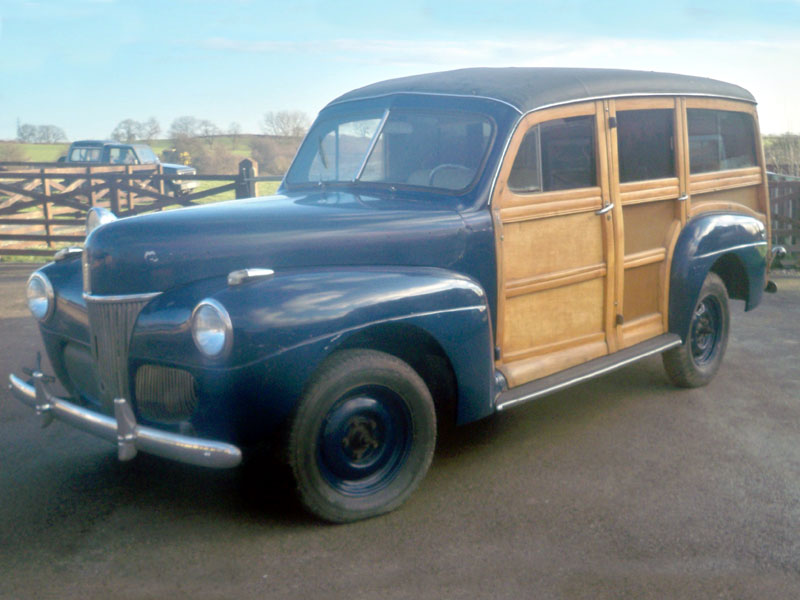 Arguably the fore-runner of today's SUVs, Woodie Estate Cars (Station Wagons in American parlance) were a stylish cross between a Saloon and Panel Van, in which wood was an integral part of the structure. They emerged in the '30s and remained popular into the '60s on both sides of the Atlantic. Many were created from Saloons by independent bodyshops but Chrysler and, in particular, Ford integrated the Woodie into their main model ranges, good examples of which are now keenly sought by collectors. The American Fords of 1941 were notably more modern than their predecessors, with wider bodies that all but covered the running boards. The front and rear bumpers were still pronounced but fashioned more to the body contours. The model's key identifier was the new radiator grille that was designed in three distinct sections, with a tall centre panel flanked by kidney-shaped ones on either side. The engine line-up comprised an L-head straight-six unit and a pair of flathead V8s of 3.6 and 3.9-litre capacity respectively. The standard fit for the De Luxe models was the 3.6-litre V8, which had an output of some 90bhp.

The left-hand drive 1941 Ford De Luxe Woodie on offer is a 'barn find' that will reportedly require some light recommissioning / restoration before it returns to the road. A two owner vehicle, it was first registered to His Highness Sir Sadiq Muhammad Khan Abbasi V Nawab (later Amir) of Bahawalpur GCSI, GCIE, KCVO, NQA. Notable as the last Monarch of the Bahawalpur kingdom, Sir Sadiq was also a true motoring enthusiast whose collection further encompassed various Rolls-Royce, Cadillac and Renault cars. The Ford was originally registered 'BWP 307' but re-registered 'BR 4137' following India's independence. It would seem His Highness had a strong affection for the Woodie, as it apparently featured on his seasonal and New Year's greeting cards. The vendor regards the engine and transmission as "good" and the woodwork as being in "very good original condition". This fascinating Ford is MOT'd into January 2013.
Share: