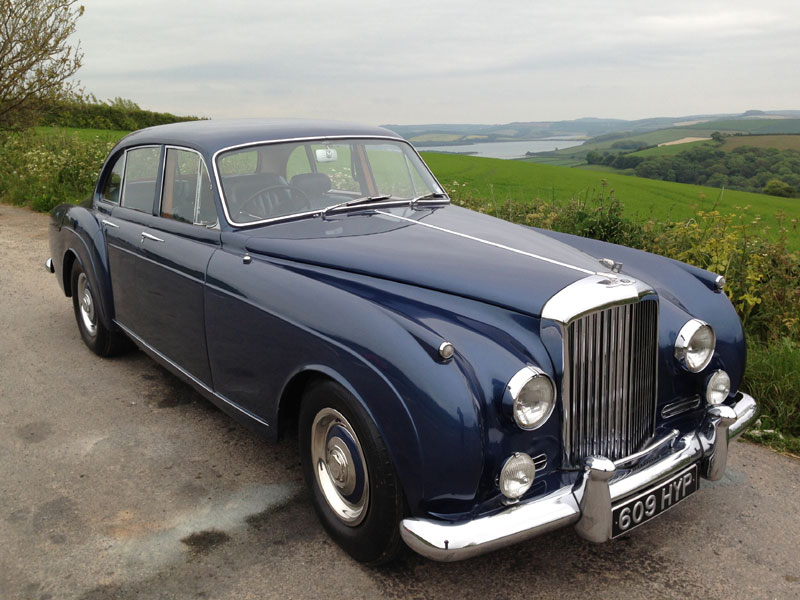 "In the eyes of many, this creation was the most elegant Bentley ever produced and the `Venus de Milo' of automobiles" (RREC President Lt Col Eric Barrass OBE commenting on chassis BC14DJ at the July 1991 Harewood House Rally). The 10th of just 61 Bentley S1 Continentals to wear H.J. Mulliner's delectable four-door, six-light `Flying Spur' coachwork (design number 7443), chassis BC14DJ was ordered new by Angus Mackinnon Esq - chairman of private bank Brown, Shipley & Co - as a present for his wife. Resident at Hunton Manor, Hampshire, Mrs M. Mackinnon kept the PAS-equipped sports saloon until 1960 when it was succeeded by an equivalent S2 Continental. Re-registered as `609 HYP' (from `KLL 125'), the four-seater is known to have subsequently belonged to Berkeley Square Garages, Adams & Adams of New Malden, R.N. Khan Esq of NMT (Trading) and Jack Manning of Esher before entering the current ownership on 3rd December 1983. Used for family holidays, outings and RREC meetings, `Venus' (as the Bentley became known after Eric Barrass's pronouncement) has undergone a degree of restoration over the last thirty years. Treated to a photographically-documented bare metal respray, the S1 Continental has also had its brightwork rechromed and brake system overhauled. Pleasingly retaining its original Blue leather upholstery, the interior has nevertheless benefited from a replacement West of England cloth headlining, refinished woodwork, rejuvenated period radio and new wool carpets. Believed but not warranted to have covered some 112,000 miles from new, the Flying Spur sports an overhauled dynamo, new HT coil / ignition leads, ultrasonically cleaned twin SU HD8 2-inch carburettors and replacement dual SU electric pumps. Described by the vendor as being in "good overall" condition having passed a MOT test on June 12th 2013 with no advisories, this handsome Bentley boasts its original owner's handbook and RREC copy chassis cards.
Share this page: