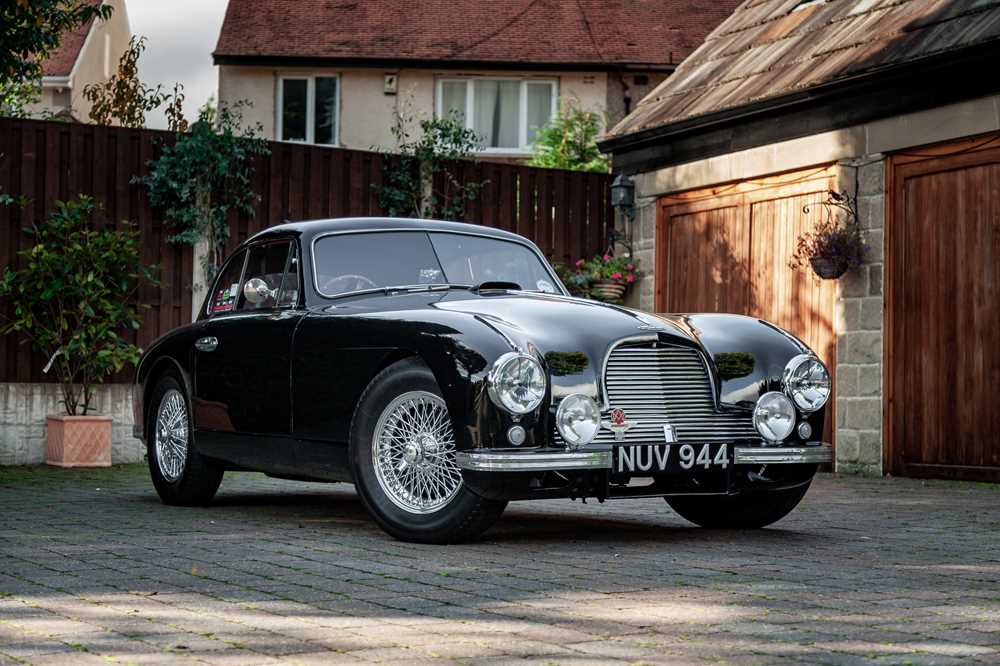 “It would appear that every so often the gods pass over some Works or another and with an inclination of the head inspire the production of a car with outstanding virtues. The Aston Martin DB2 stands worthy in the pedigree of real motor cars stretching back through the 4½ Litre Bentley to the 30/98 Vauxhall” (Lawrence Pomeroy, The Motor, October 1950)

According to its accompanying copy factory records, chassis LML/50/393 was originally finished in Black with Red upholstery. Notable for being among the last twenty of just 411 DB2 cars made, its specification included the more powerful ‘Vantage’ specification 2.6 litre DOHC straight-six engine (number VB6E/50/1221). Bearing the London registration number ‘NUV 944’, the two-seater was supplied new via Aston Martin concessionaire Brooklands of Bond Street to Ian Scott Duffus Esq of Old Place Farm, Mayfield Sussex. A successful businessman, Mr Duffus is believed to have been a scion of the Scottish shipping dynasty and to have garnered a degree of media coverage for building a private funicular railway to access his subsequent clifftop home in Devon.

Returning to the factory for routine maintenance until November 1957, the DB2 relocated to the Midlands passing through the hands of Philip Scofield Esq., M.J.A. Hill Esq. and Queen’s Park Garage Ltd of Harborne before being acquired by William Ward Esq in February 1964. Taxation stamps in the continuation buff logbook on file indicate that Mr Ward took the Aston Martin off the road during 1965. Dormant for the next twenty years, ‘NUV 944’ was then sold to Keith Sampson who embarked upon a meticulous body off, chassis up mechanical and cosmetic restoration.

Completed by February 23rd 1995 when the car passed its first recorded MOT test with ten miles on the clock, the work was documented via a photo album and handwritten log with the body accounting for some 560 hours alone. A luminary of the Sunbeam Tiger Owners’ Club and proprietor of the Sunbeam Spares Company, Mr Hampson was no stranger to classic cars. With plenty of other machinery to choose from, he covered a mere 1,700 miles or so behind the wheel of ‘NUV 944’ during his twenty-three years’ tenure. Thereafter, it passed to renowned Aston Martin collector Anthony Moody who added a further 600 or so miles to the odometer up until 2012 when he asked Philp Jones of Byron International to broker a sale on his behalf.

Drawn to the Byron International advertisement which described it thus: ‘LML/50/393 is believed to be one of the finest examples available. The combination of its condition after several thousand hours of restoration work, a well-documented history of long-term careful ownership, and very desirable specification make it a highly sought-after acquisition for any serious collector or enthusiast’, the vendor commissioned a pre-purchase report from Chris Adams of the respected Feltham Aston Martin specialist Four Ashes Garage. Mr Adams’ conclusions were as follows: ‘This car has been superbly restored . . . it was restored by non-AM specialists when information was difficult to find . . . It is hard to fault the basic restoration, a body off full restoration before this became commonplace with body, paint and trim almost concours level. The engine problems are easy to fix but will cost a lot of money, caused by lack of basic product knowledge’.

Intending to use the DB2 for historic rallying and trials, the seller negotiated a modest discount and despatched it to Four Ashes for a thorough engine reworking plus attention to the brakes, steering, suspension, gearbox, wiring and rear axle. As well as having various new internals fitted and being converted to run on unleaded fuel, the 2.6 litre DOHC straight-six benefited from Four Ashes’ expertise with regards to compression ratios, camshaft timing, ignition timing etc. The result according to a dyno sheet from Mass Racing was an impressive 169bhp and 163.8lbft of torque (an impressive thirty-five percent increase in power over a standard ‘Vantage’ unit and more than Jaguar initially quoted for its contemporaneous 3.4 litre XK engine). The gearbox was overhauled with new synchromesh cones and bearings. The steering was rejuvenated too and upgraded with variable electric power assistance. A rear damper conversion was complemented by a heavy-duty front anti-roll bar, reconditioned front dampers and lower / stiffer springs all round. The rear axle gained a Quaife partial locking differential, the flywheel was lightened / balanced and a new clutch installed. The electrics were converted to negative earth with other concessions to modernity encompassing an uprated alloy radiator, Kenlowe fan, stainless steel exhaust and K&N air filters.

Completed in time to participate in the June 2013 Three Castles Rally, the ‘breathed on’ DB2 duly won its class and was subsequently invited to appear on the Aston Martin Owners’ Club stand at that year’s NEC Classic Car Show. ‘NUV 944’ also contested the 2014, 2015 and 2016 Three Castle Rallies as well as taking class honours on the 2016 Scottish Malts Rally. The two-seater was granted a FIVA Identity Card in 2017 as the vendor toyed with the idea of contesting the Mille Miglia Storica. In the end his other motoring commitments (mainly Maserati) put pay to such plans. Nonetheless, he continued spending money on the DB2 switching its upkeep to Aston Engineering of Derby. In addition to routine servicing, the latter overhauled the brakes in 2019 and fettled the gearbox during 2020.

The seller tells us that he has spent over £100,000 improving and maintaining ‘NUV 944’ and it certainly comes with an impressive history file. Advertised for sale at £259,995 two years ago, the Aston Martin was reviewed and road tested by Classic Cars magazine’s Paul Hardiman who commented as follows: ‘This is an older restoration, but the workmanship is lasting so well it’s hard to tell ... It starts easily, goes well, and as you’d hope at this money, is a fully sorted car that’s very pleasant to drive. DBs of this vintage can be crude old things, but this is about as good as they get ... When tired DB2/4s can be bought at auction for not much more than £100k, this might look pricey at first glance, but it is the earlier, rarer, more elegant (and Mille Miglia eligible) model that couldn’t be replicated to this near-perfect standard for the price’.

We believe the modifications have been sympathetically carried out and greatly enhance the driving experience and usability. However, they are all reversible should a new owner so wish. The engine timing cover is clearly stamped with the number ‘VB6E/50/1221’ and the unit started readily and sounded well during our recent photography session. The odometer displays 13,500 miles (11,000 or so accrued by the vendor). Put simply, this is a good car from a good home and worthy of close inspection. Offered for sale with large history file and ‘no advisories’ MOT certificate valid until October 2022.