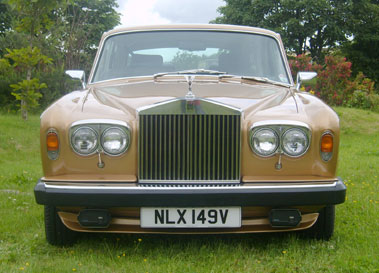 Inspired, at least partially, by a new generation of more driver-orientated luxury cars as typified by the BMW 7-series and Mercedes-Benz S-class, the Rolls-Royce Silver Shadow II was announced in February 1977. While these young pretenders could not be viewed as direct competition (if only on cost grounds), they illustrated the increasing importance that the buying public was placing on chassis dynamics. Thus, while the new model utilised the same four-door monocoque bodyshell, mellifluous 6750cc V8 engine and smooth-shifting GM400 series automatic gearbox as the outgoing Shadow, it gained a prominent front air dam, larger one-piece bumpers, revised front suspension geometry and - most importantly of all - power-assisted rack and pinion steering. Undeniably better to drive, the Shadow II further benefited from the adoption of a more ergonomic fascia and split level air conditioning. Still trimmed with the finest quality leather hides, wood veneers, chrome fixtures and carpets available, it treated occupants to a uniquely cosseting experience.

This example was first registered in 1980 and is attractively finished in Champagne with brown leather upholstery. Reputedly a one-owner car until 2002 it was purchased by the present owner from H&H at Buxton in 2004 and is understood to be in very good original condition having covered just 75,000 miles from new. Featuring rear foot rests and 4 headrests the interior is said to be "as new".

A letter on file from the previous keeper confirms that the car was serviced by Rolls-Royce main agents in London whilst in his ownership and for the last 4 years it has been maintained by Broughtons of Cheltenham and Rolls-Royce specialists in Huddersfield.