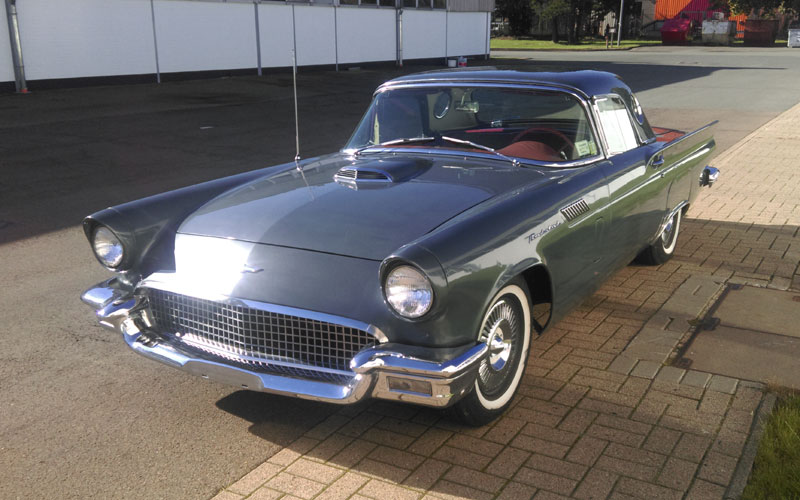 By the time Ford dispensed (at least temporarily) with the Thunderbird moniker in 2005, the model had progressed through no less than 11 generations. It had also been immortalised by the Beach Boys' hit song Fun Fun Fun. The first generation car hit the streets in October 1954 and, while it was created in direct response to Chevrolet's Corvette, Ford's emphasis was more on comfort than overt sportiness. Though sleeker than most of its Ford siblings, it shared many of their components and the V8 engine was borrowed from the company's Mercury division.

The splendid 'matching numbers' T-Bird offered is from the last year of the First Generation model, during which no less than 21,380 examples were sold. Finished in Battleship Grey and trimmed in an eye-catching shade of Red, this fancy Ford is powered by the rare 312ci so-called 'E Code' powerplant that uses a pair of four barrel Holley carburettors and period correct aircleaner to help deliver 270hp. Most of the option boxes have been ticked and this car's comprehensive specification includes: electrically controlled windows and seats; power steering; tinted glass; Black soft top; porthole hard top; and radio.

The Ford is understood to retain its original paintwork and to be largely unrestored. Despite never having been overhauled, the engine is said to produce plenty of power and the total mileage is believed but (unwarranted) to be c.64,000. In recent times the T-Bird has benefited from new: dampers; tyres; radiator (new old stock); exhaust system and fuel tank. The following have been overhauled: transmission; front suspension; braking system; power steering (including control valve); starter; and generator. The vendor says the Ford 'runs and drives anywhere without hesitation, even over a long distance, and the whole car is in remarkably original condition and complete with rare colour combination'.
Share: