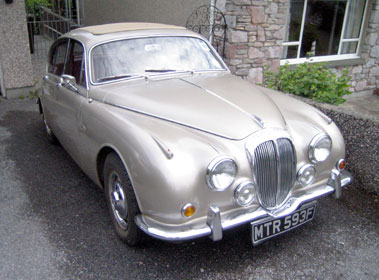 The Daimler V8-250 (originally dubbed the 2.5-V8) was a derivative of the all-conquering MKII Jaguar saloon. It took its name from the engine that powered it - a lightweight, eight cylinder unit of 2548cc designed by Edward Turner; the aluminium hemispherical cylinder heads of which closely resembled those of the Triumph motorcycle engine which had already made him famous. Turner's silky smooth V8 was first seen in the Daimler SP250 (nee Dart) sports car launched in 1959. Following the merger between Jaguar and Daimler the following year, the new company decided the V8 was the perfect basis for an upmarket version of the MKII Jaguar. Being more powerful than Jaguar's own 2.4-litre straight-six engine, the V8 endowed the saloon with greater performance (the top speed was around 112mph), and being lighter it resulted in less weight over the car's front wheels and therefore arguably superior handling and more nimble steering. The 140bhp unit was mated to a Borg Warner three-speed automatic gearbox. Daimler versions of the MKII were readily distinguishable by the heavily fluted tops of their chrome radiator grilles and, of course, lacked the `leaping cat' bonnet mascots of their Jaguar siblings. The V8-250 continued in manufacture until production of all MKII derivatives ceased in 1969, by which time some 17,620 of the Daimler version had been made. Most people's memories of the MKII cars were crafted by victories on the race track, films of fleeing bank robbers or Inspector Morse driving to yet another crime scene to the accompaniment of a Wagner soundtrack. Most, if not all the cars concerned would, however, have been Jaguar-powered. People who've been lucky enough to own Daimler V8-250s, however, know that version has a magic all of its own.

The 1968 example on offer is finished in gold complemented by a red leather interior and benefits from a Webasto sunroof that is apparently in good working order. MOT'd until June 2010 and taxed until May of the same year, the Daimler is said to enjoy a "good" engine and transmission and "fair" paintwork and interior trim. In summary, the owner says it is a "good car that needs no major repair work".
Share this page: