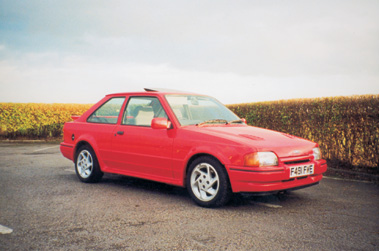 In 1980 Ford changed from rear to front wheel drive for their Escort, with all round independent suspension and servo disc brakes on all but the most basic version. As on the Fiesta, the 1.1 to 1.6-litre engines were transversely mounted, while the most sporting version was the XR3, which became the fuel-injected 105bhp XR3i with 5-speed box in 1983. Even more potent were the RS1600i of 1982-3 and the 1984 launched RS Turbo with 130bhp and 130mph capability.
This one owner low mileage RS Turbo was made in 1989 and comes with full service history and all previous MOTs. The vendor claims it is a totally unmarked example, which has the benefit of a full Recaro seated interior, making it the most desirable version to have. The red painted bodywork is said to be immaculate, the grey interior unmarked and both 1.6-litre 4-cylinder turbocharged motor and 5-speed manual gearbox in very good order. The 78,400 miles displayed when entered is reckoned to be the total mileage, while the MOT is current until September.
Share: