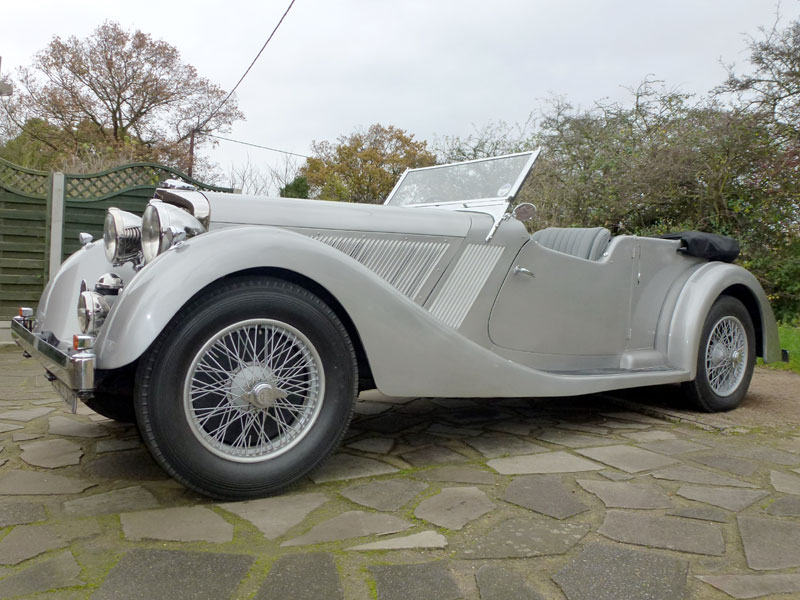 "The international reputation achieved by Talbot products has gained an added lustre through racing successes, but is fundamentally based upon the good repute which these cars enjoy amongst Talbot owners in all countries. The make is definitely numbered in that select group of cars of distinction which endear themselves to the heart of the true enthusiast" (The Motor, May 1935)

Notable as the last of the Georges Roesch-designed Talbots, the BG110 was introduced in October 1935. Based around a 10ft 0in wheelbase, the newcomer's low-slung 'dropped' chassis frame was equipped with all-round semi-elliptic leaf-sprung suspension, Luvax adjustable dampers and large-diameter drum brakes. Among the most unprepossessing looking but technologically sophisticated powerplants of the 1930s, the BG110's straight-six boasted a competition pedigree - if only by association with its AV105 predecessor - that encompassed the Le Mans 24 hours, Ards Tourist Trophy, Mille Miglia and Alpine Trial. Displacing 3377cc, the engine housed a seven-bearing crankshaft, nickel chrome Swedish steel con-rods, four-bearing chrome-plated camshaft, vertically staggered inlet / exhaust tracts and diagonally opposed combustion chambers. Shorter, lighter and more rigid than most contemporaries, a compression ratio of 7:1 allowed the unit to develop a claimed 123bhp @ 4,500rpm. Initially fitted with Wilson four-speed pre-selector transmission as standard (later cars utilising a four-speed manual Rootes gearbox), Talbot's flagship was capable of some 95mph. A natural rival to the likes of the Alvis Speed 25, Bentley 4.25 Litre and Lagonda LG45 / LG6, the BG110 was decidedly more exclusive. Total production between October 1935 and May 1939 is thought to have amounted to just eighty-nine cars (chassis numbers 4500 - 4589).

One of just eleven Vanden Plas-bodied Talbot BG110 Speed Tourers known to the Sunbeam-Talbot-Darracq Register, this particular example - chassis 4587 - was built with the four-speed manual synchromesh gearbox and despatched to the famous London coachbuilder on 24th April 1937. Completed under Order Number 3564 'Sports for Clement Talbot Ltd - Steel Dust 5/37', the four-seater was then forwarded to marque concessionaire Agnew & Graham of 7-17 Oxford Street, Belfast. Not content with crossing the Irish Sea, the Talbot ended up traversing the Atlantic Ocean when it was bought by first owner, Captain F.C. Moutray of North Kamloops, British Columbia. Interestingly, surviving paperwork on file not only includes the original LEP Transport shipping documents but also extensive correspondence between Captain Moutray and Talbot's Barlby Road, North Kensington factory. Despite encountering numerous problems with the BG110's air filter and suspension, both issues likely caused by the dirt roads that predominated in that part of Canada at the time, Captain Moutray kept the Speed Tourer until 1953. Thereafter, it is known to have passed through the hands of R.D. Boomer, R.D. Brown, B. Deakin, J.B. Gunn, H.R. Moself and John Guyatt before entering the previous ownership in a partially dismantled state.

Pleasingly found to retain its original engine (number BG 84) and dilapidated body tub albeit that the rest of the car was contained in a series of cardboard boxes, chassis 4587 was duly entrusted to Hugh Doherty of Draperstown for restoration. Repainted and retrimmed in its original livery taking samples from the surviving bodywork and upholstery respectively, the Talbot was also treated to a thorough engine overhaul by renowned specialist A. Archer Co Ltd of Gt Dunmow (December 1992 to June 1993). Expertly shaped and fabricated from aluminium, the replacement wings would not have disgraced Vanden Plas's own craftsmen. Finished off with a new hood / tonneau cover and Lmarr of California wheel discs, the Talbot was issued with an age-related Northern Irish registration number plate, 'JZ 1807', on March 1st 2000.

Since entering the current ownership via our July 2009 Buxton auction, the Speed Tourer has benefited from the installation of a brand new metal floorpan and replacement fuel tank not to mention the cosmetic tidying of its dashboard and instruments among other things. Returning to A. Archer Co Ltd of Gt Dunmow earlier this year, the four-seater was treated to a £3,000 back axle overhaul. As well as having its castings crack tested and bearings replaced, the assembly was upgraded with a 4.1:1 crown wheel and pinion (in place of the original 4.6:1 unit) which has notably enhanced the car's cruising capability. The inlet manifold has a temporary repair where a blow hole has appeared but a replacement original inlet manifold accompanies the car. A handsome and very rare Post Vintage Thoroughbred, this appealing Talbot BG110 is only being offered for sale due to ill health.
Share: