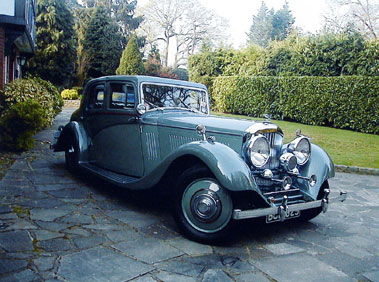 At the dawn of the 1930s with the reverberations of 'Black Friday' (29/10/1929) being felt worldwide, competition between carmakers grew increasingly desperate. Thus, while WO Bentley sought to refine his 8 litre into the ultimate luxury carriage, Rolls-Royce responded by dabbling with a sports car concept. Their concerns as to the branding of 'Peregrine' (as the project was labelled internally) were alleviated by Bentley's collapse in 1931. Outflanking rivals D. Napier & Son, they acquired Bentley wholesale (including WO's services) for £125,257. With a department brief that "the new car must be as unlike the Rolls-Royce models as possible" Derby engineers set about preparing 'Peregrine' for flight. Built on a 'double-dropped' chassis carrying all round semi-elliptic leaf sprung suspension and assisted drum brakes, the new car used a tuned version of the Rolls-Royce 20/25's 3669cc OHV straight-six. Boasting twin SU carburettors, a wilder cam, strengthened con-rods and a higher compression ratio, this revamped unit developed around 120bhp (a fifty percent improvement) without compromising on refinement. Equipped with the 20/25's four-speed manual gearbox, high-geared worm and nut steering and hydraulic dampers, the resultant 'Silent Sportscar' - as the Bentley 3.5 litre soon became known - was unveiled during the August 1933 Ascot Races.

Finished in two-tone grey with burgundy coachlining and cream leather upholstery, this particular example is variously described by the vendor as being in "original / patinated" (interior trim), "reasonable" (paintwork) or "OK" (engine, four-speed manual gearbox, electrical equipment, chassis, wheels) condition. While, he considers the bodywork to "a little tired but OK / smart". Entering the current ownership in 2003, 'BUL 625' has had just two keepers in the last fifty-one years. Wearing rakish four-door saloon coachwork by Windovers, it is said to have benefited from "a major front suspension, steering and brake overhaul". Rewired by renowned Derby Bentley specialists Fiennes, 'BUL 625' is further able to boast "a high ratio CWP, heater, additional cooling modification (pipe between front and rear of engine on the offside), sump heater and most small tools". Riding on disc-covered wire wheels shod with "almost new tyres", it sports an encased rear-mounted spare, 'driver's eye' searchlight and trumpet horns. A real Post Vintage Thoroughbred, this elegant Derby Bentley is offered for sale with MOT certificate valid until May 24th 2008 and historic class (free) road tax valid until May 2008.