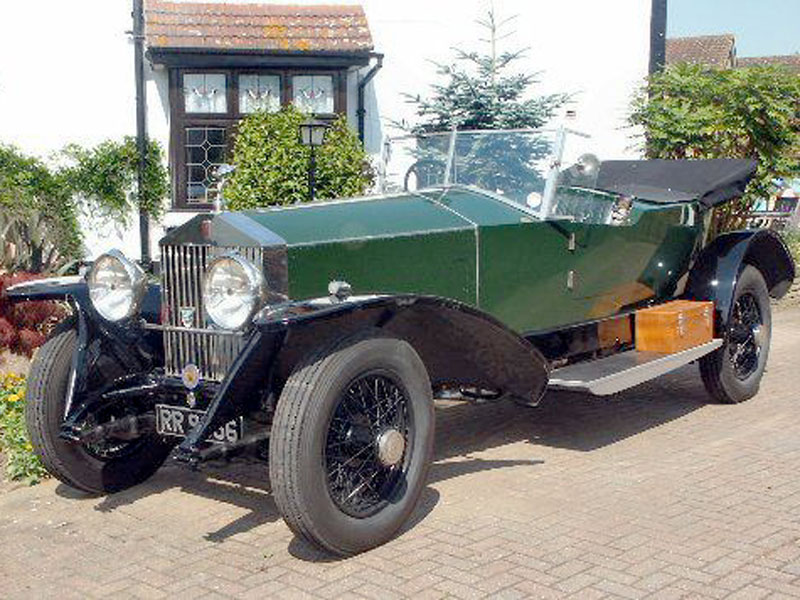 Delivered to the coachbuilder Barker on 13th August 1928, chassis number 25CL was displayed at that year's Olympia Motor Show. Bodied as a Pullman Limousine de Ville, it featured in Autocar's official show guide. Subsequently sold to F.J. Barnes Esq of Woodthorpe, Notts, 'RR 9956' was serviced by the factory over the next few years. Drifting into obscurity following WW2, it resurfaced at the Vintage Transport Enthusiast's Club Alexandra Palace auction in June 1975 and was catalogued thus: "Purchased by the present owner as a chassis, and completely stripped, all parts needing renewal being remade. The engine was also completely stripped and refurbished with new rings, re-metalled bearings etc. Since then the car has been driven for only 450 miles. The electrics were overhauled, and a new body built as a replica of a Barker Tourer". Fabricated from lightweight marine plywood, this elaborately curved boat-tailed construction was the work of Swindon coachbuilders, Bampton Bros. Passing into the hands of David Willis (former president of the RREC's Northern Section), the rejuvenated Phantom soon became a regular feature at Club meetings including the 1976 Englefield Annual Rally, 1977 Windsor Jubilee Rally, 1979 Packington Hall Annual Rally (Winner Class 13 - 'Etat Prewar') and 1984 'Rolls-Royce on Wing and Wheel - 80 Years On' Duxford Rally.

Purchased by its previous keeper - another RREC section chairman - during 1993, 'RR 9956' continued to participate in numerous events as well as on several Continental rallies. Treated to a new radiator core, reconditioned torque tube and relined brakes before entering the current ownership during October 2004, chassis 25CL is understood to have covered 15,000 miles over the next three years. However, following a day's course car usage at Mallory Park in August 2007, the engine began to play-up. Dispatched to R&E Arnett Ltd of Doncaster, the straight-six was found to be suffering from cracked cylinder blocks. The faulty castings have since been stitch-repaired and pressure-tested to confirm their soundness but are now out of round and will thus require boring and new pistons etc. Off the road whilst its engine malady has been ongoing, the Phantom's last MOT certificate expired on 9th August 2008. Finished in green over black with green leather upholstery, 'RR 9956' is reportedly in good cosmetic order save for some paint lifting on its wings. The choice of two RREC section chairmen and featured in its current guise on pp 44-45 of 'Rolls-Royce and Bentley Motor Cars' by Klaus-Josef RoBfeldt, this handsome Tourer is offered for sale with a report detailing the engine work carried out thus far plus an estimate as to the likely cost of completing repairs etc.
Share: