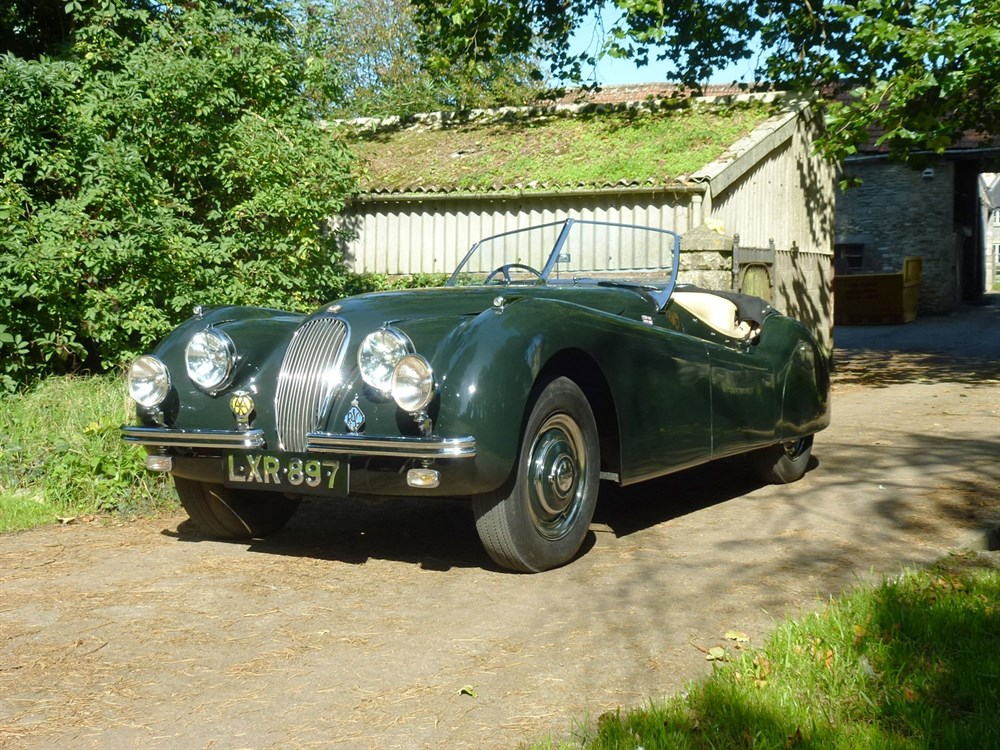 - BRG with Light Tan leather, in current family ownership since 1970

Launched at the 1948 Earls Court Motor Show, the Jaguar XK120 Roadster caused a sensation. Penned by Sir William Lyons, the model's sensuous lines seemed almost impossibly glamorous to a country still feeling the effects of rationing. While, the 120mph top speed that its name signified soon became the stuff of legend. Literally flooded with orders, Jaguar began limited hand-built production soon thereafter (although, it was not until 1950 that the factory was sufficiently 'tooled-up' to discard aluminium in favour of steel for the curvaceous bodywork). Credited with 160bhp and 190lbft of torque in standard tune, its legendary 3442cc DOHC straight-six engine was allied to four-speed manual transmission.

Forming part of a deceased estate this UK market RHD Roadster was delivered via Henlys to Garrard Sidecars Ltd of Acton, West London on 22 January 1951 and originally finished in Black with Biscuit interior. Following a period of ownership in Wales in the 1960s the car was acquired by the vendor's late father in April 1970. Much loved and kept as original as possible, LXR 897 was restored in 2000. The works including; bodywork by Classic Parts & Panels of Quainton, Bucks; a retrim in Light Tan leather by Alan Piper of Marston Magna, Somerset and an engine overhaul by Stan Gray of Holt, Wilts, a former development engineer at Marcos. An annual entrant on the Mendip Rally and various motoring festivals the car benefits from recent service work and rectification of three minor advisories on the last MoT certificate. This delightful XK is accompanied by a Swansea V5c, old green logbook, Owner's Manual, original Spare Parts Catalogue, Heritage Certificate, weather gear, assorted invoices and current MoT to April 2020.
Share: