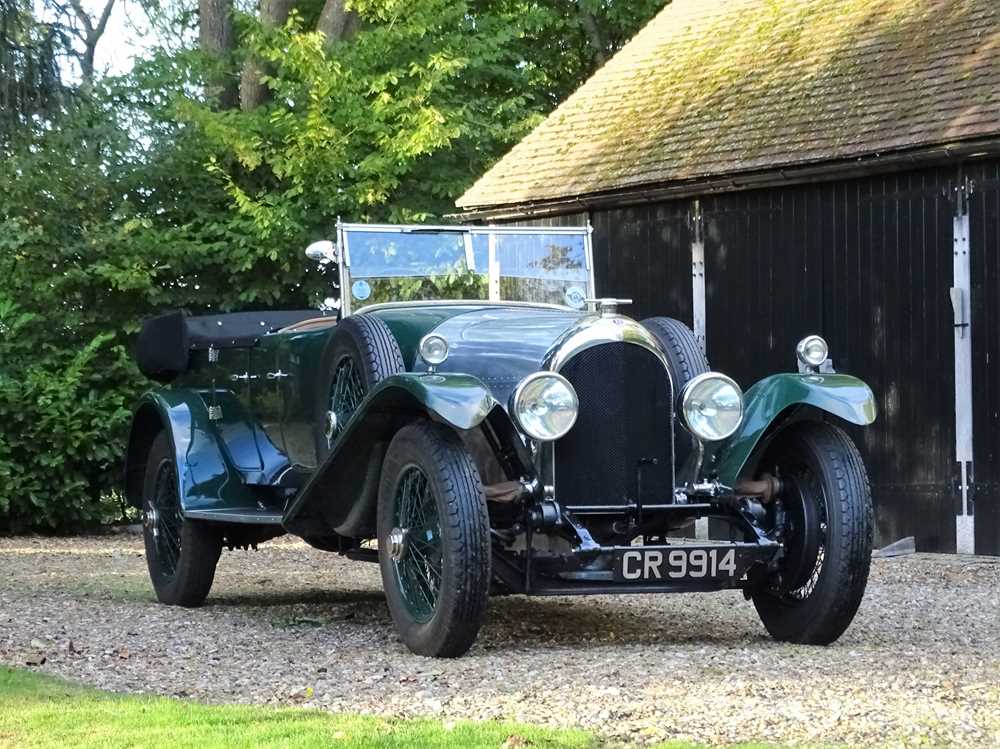 "It was not the means whereby the 3-Litre Bentley performed, but the manner in which it did it, that endeared the car to sportsmen who took pride in their driving. The engine was remarkably flexible, strong and reliable, the gear ratios admirably chosen, the handling excellent and the quality unremittingly high. So, also, was the price, but an ever-growing reputation, augmented by striking racing victories - including the Le Mans 24 hours of 1924 and 1927 - ensured its success" ('Classic Sports Cars' by Cyril Posthumus and David Hodges).

A railway engineering apprentice turned aero engine designer, Walter Owen Bentley previewed his first creation, the immortal 3-Litre, at the October 1919 London Motor Show (though, he would not deem it production ready for another two years). Inspired by a 1914 Humber TT racer, the newcomer's ladder-frame chassis was equipped with all-round semi-elliptic leaf-sprung suspension and rear-wheel drum brakes (four-wheel brakes becoming the norm from 1924 onwards). The car's heart and most advanced feature was its 2996cc engine. A long-stroke four-cylinder (80mm x 149mm) that prioritized torque over top-end power, it boasted a five-bearing crankshaft, shaft-driven overhead camshaft, monobloc construction, twin ignition, four valves per cylinder and aluminium pistons.

Developing between 65bhp and 88bhp, the unit was allied to a separate four-speed gate-change gearbox. Supplied in bare chassis guise only, albeit with a choice of wheelbase lengths and engine tune, the 3-Litre remained in production until 1929 by which time some 1,621 are thought to have been made. As well as its two Le Mans victories, the Bentley enjoyed considerable success at Brooklands and even broke the 24-hour world record around Montlhery setting a 95mph average speed.

According to the motoring historian and author Tom Clarke, chassis 930 is one of just twenty-four Bentley 3 Litres that are known to have survived to the present day with their original Gurney Nutting coachwork. The car also pleasingly retains its factory-fitted front crossmember (930), engine (914), steering box (926), bonnet (930), gearbox (1498) and rear axle (930 on banjo casing and nose piece). We presume that the front axle is original too but were loath to scrape away the paint. For a WO Bentley to have retained such an unusually high proportion of original components indicates that it has led something of a charmed existence. The floorboards are held in place with nicely crafted, T-headed brass bolts and we suspect the door furniture to have come from Gurney Nutting’s Chelsea workshops too.

First registered in Southampton during February 1925 as ‘CR 9914’, the Bentley was built on the Standard (10ft 10in) wheelbase and supplied new to local resident J.B.M. McMeikin Esq. who is the only owner listed on its accompanying copy factory service record. The same document suggests the Open Four-Seater had (a) covered a mere 9,000 miles by the time that its five-year guarantee expired on 28th February 1930 and (b) that it dropped off Cricklewood’s radar some four years later. Surviving World War Two, the 3 Litre belonged to Captain Ivan Forshaw by the late 1940s. Former secretary of the Lagonda Club and proprietor of Aston Service Dorset, Capt Forshaw had a real love of British engineering and indeed there are photographs on file of him tinkering under the bonnet and leaning against one of the twin-mounted spare wheels. It is unknown whether he was responsible for installing the twin SUs which provide more power than the initial Smiths five-jet carburettor.

Imported to America by the Rolls-Royce and Bentley dealer Neil McDade of Chattanooga, Tennessee in 1956, chassis 930 passed to famed collector Bernie Goldflies of Dayton, Ohio and near neighbour Richard Fisher before being sold to George Evenson during 1968 who kept it for nigh on thirty years. Enthusiastically evented by Mr Evenson but otherwise stabled in a heated garage, the Open Four-Seater was awarded a series of third, second and first place Certificates of Merit at various RROC regional and national meetings from the 1970s through to the 1990s. Recrossing the Atlantic in 2014, the 3 Litre then spent time in Austria prior to entering the current ownership during 2018. A true Rolls-Royce and Bentley enthusiast, the seller has commissioned renowned marque specialist Ewen Getley’s Kingsbury Racing Shop Ltd to fit a new cone clutch, improve the wiring, restore the bezel switch and overhaul the engine via a rebore, re-magnetised magnetos, new +40 thou pistons, valves and valve guides etc. Interestingly, Mr Getley is understood to have been surprised to find the previous pistons were of the factory ‘hourglass’ type and that the propshaft had both its pot joints. Corresponding invoices total circa £23,000 and also show that the brake linings have been renewed and the carburettors attended to.

Blue Label cars may be less fashionable than their Red Label counterparts but it is hard not to be charmed by this one’s originality. Featured in the Johnnie Green book ‘BENTLEY: Fifty Years of the Marque’ and starting readily upon inspection, ‘CR 9914’ is only being offered for sale to free up garage space for another Bentley project. A handsome, well-proportioned WO which could be upgraded to 4½ power or simply enjoyed ‘as is’. Accompanied by a bound ‘Technical Facts of the Vintage Bentley’ manual, the aforementioned Kingsbury Racing Shop Ltd bills, sundry other paperwork and period photographs (including a hand tinted image taken by an Egyptian photographer).