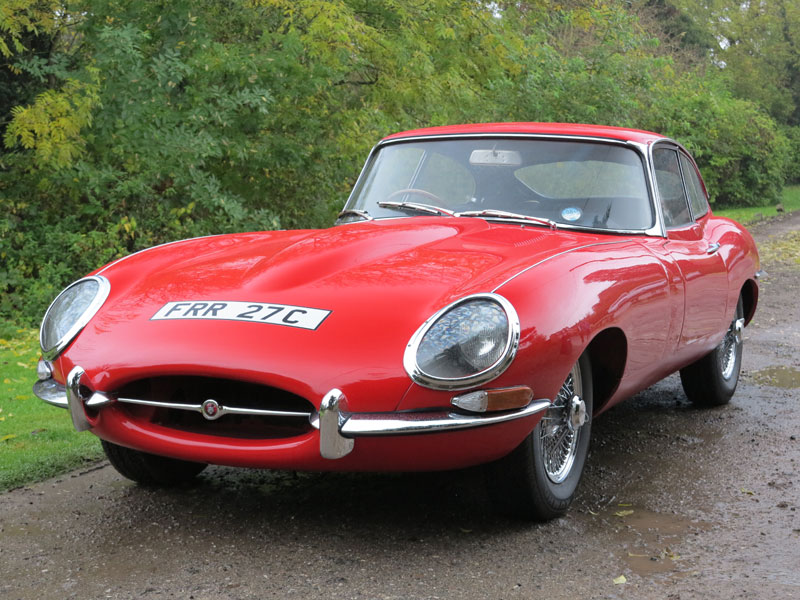 The last E-Type Jaguar rolled off the production line in 1975, yet the model still has a unique ability to excite enthusiasts of all generations, its Malcolm Sayer-penned lines thought by many to be among the most striking ever to adorn a motorcar. Like the XK150 before it, it was born of Jaguar's competition successes on the race tracks - this was no ordinary motorcar, it was a true thoroughbred. The E-Type made its debut at the 1961 Geneva Salon and from birth was available as a Fixed Head Coupe or a two-seater Roadster. At launch the newcomer was the fastest production car of its time - its 3.8-litre straight-six engine allowing a 0-60mph acceleration time of a whisker over seven seconds and top speed of c.150mph. Despite this, the engine size was increased from to 4.2-litres in October 1964, with which came a sweeter all-synchromesh gearbox, better brakes and more comfortable seats.

This tidy-looking Series I 4.2 Coupe features the popular combination of Red bodywork teamed with Black interior trim and rides on chromed wire wheels. 1 of just 1,583 right-hand drive examples made, chassis 1E20730 was supplied new via the St Helier Garage Jersey to J.P. Labesse Esq, and at that time carried the local registration 'J 2666'. The two-seater returned to the mainland in 1975, since when it has had just three keepers. Thousands of pounds have evidently been invested on restoring the E-type over the years and the vendor currently describes the XK engine as 'condition 1', bodywork as 'condition' 2', the paintwork as 'very good' and the manual gearbox and part-restored interior trim as 'good'. The odometer currently registers an unwarranted 79,351 and the Jaguar, now UK registered 'FRR 27C', is being sold complete with Heritage Certificate, receipts for work done and an MOT to April 20th 2016.
Share: