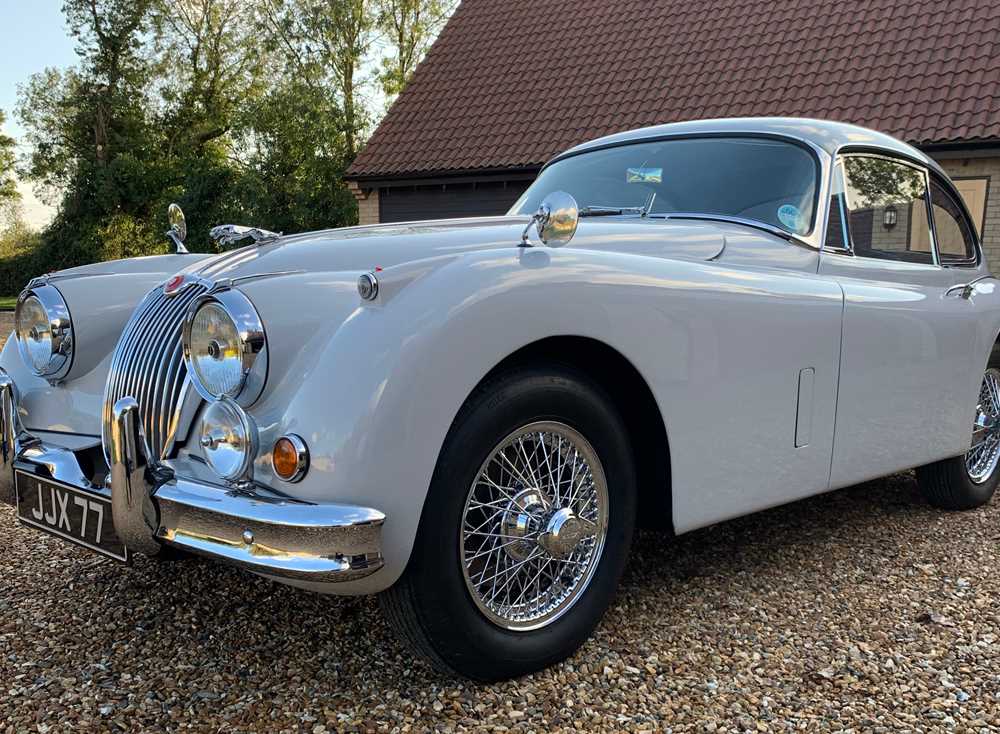 This exceedingly handsome XK150 is one of just 1,368 righthand drive examples made. It benefits from the factory-fitted Special Equipment pack (SE) that comprised tuned B-Type cylinder head, twin exhausts, wire wheels and fog lamps. The Jaguar is understood to have had just four keepers from new, and currently registers a notably low but credible total mileage of 38,400. It was delivered new by Hoffmann’s of Halifax to an S Dugdale of Sowerby Bridge, West Yorkshire on March 25, 1958. An extensive restoration was carried out in the mid-‘90s, with further refurbishment being undertaken in 2008. The Coupe is finished in its original attractive colour combination of Pearl Grey bodywork matched to a Pastel Blue hide interior, and is now being offered complete with desirable overdrive gearbox, the eye-catching registration ‘JJX 77’, JDHT Heritage Certificate, history file, and V5C log book. A very usable classic that would surely grace any collection.

The final iteration of the XK sportscar line and the last Jaguar to carry a separate chassis, the XK150 was introduced in May 1957. While its use of independent torsion-bar front suspension, a 'live' leaf-sprung rear axle and rack-and-pinion steering mirrored the practice of its XK140 predecessor, the new model benefited from the option of all-round Dunlop disc brakes (though, in practice very few - if any - cars were delivered with drum brakes). Stylistically, the newcomer was brought up-to-date with less ostentatious curves and a larger, wrap-around single piece windscreen. The dashboard too was altered eschewing wood trim for padded leather. With the E-type still very much under development, Jaguar was keen to sustain the sporting reputation that a remarkable five Le Mans victories (1951, 1953, 1955, 1956 and 1957) had earned it.

Initially powered by a 3442cc derivative of the marque's race-proven DOHC straight-six engine, the XK150 could be had in Fixed-Head Coupe, Open Two-Seater (Roadster) or Drophead Coupe guises. Ticking the 'Special Equipment' box on the order form resulted in the following upgrades: B-type cylinder head, overdrive, twin-exhaust system and wire wheels. With a claimed 210hp on tap, the 'SE' 3.4 Litre cars were reputedly capable of 0-60mph in 8.5 seconds and 124mph.

About Imperial War Museum  Click here to view the E-Catalogue