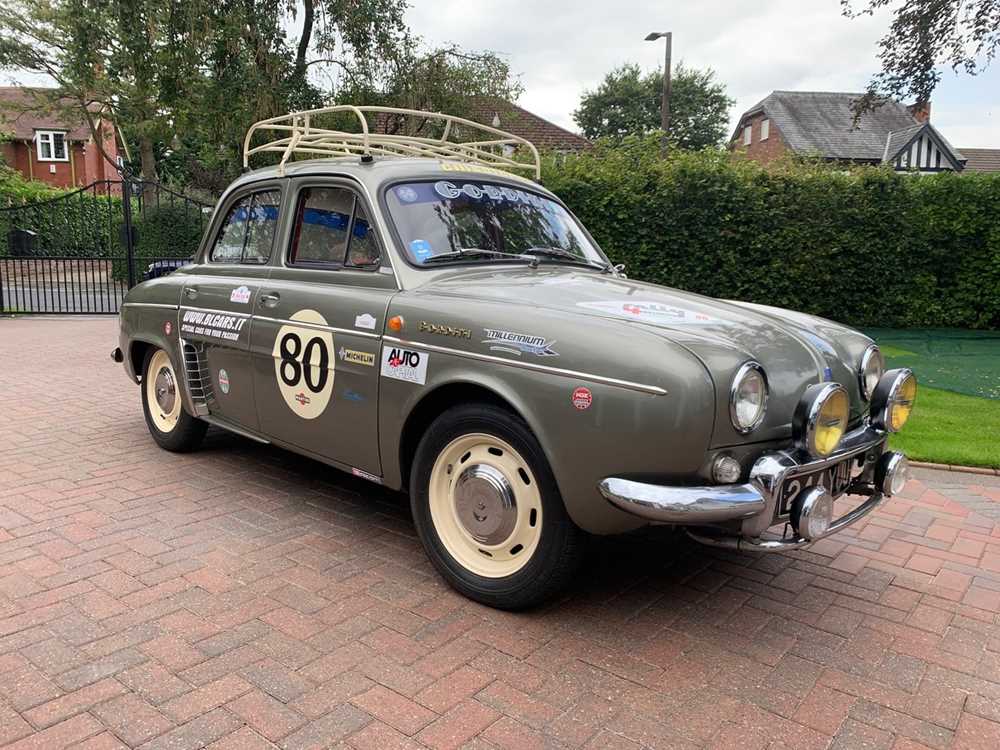 Introduced in March 1956 the Dauphine was revolutionary in the world of popular 5CV. The only inclusion from the 4CV were the wheels with five nuts and a few mechanical elements. The small family sector was a bestselling market in France at the time, and the Dauphine was quick to gain a large market share. However the Renault Dauphine’s appeal saw it sell well in countries beyond its French homeland, selling more than two million in the 11-year production run. The engine was still mounted at the rear, a habit of Renault at the time, with a 845cc straight-four engine which allowed a maximum speed of 110km per hour.

Since the 1950s, Amédée Gordini, known as ‘Le Sorcier’ for his almost magical ability to extract high power outputs from engines has been synonymous with performance versions of Renault saloons. In the late 1950s/early 1960s, competition tuned Dauphines did exceptionally well in many forms of motor sport. Their rallying victories were numerous and indeed, a Dauphine was the first car ever to win outright the three most important rallies of the day; the Tulip Rally (1957), the Monte Carlo Rally (1958) and the Alpine Rally (1959) while also enjoying considerable great success on the track. For several seasons the Dauphine dominated national 1,000cc classes around the world, carrying off overall and class victories in such events as the Mille Miglia, 12 Hours of Sebring and Tour de France.

Manufactured in 1960 and presented in Silver Green with contrasting red interior, this A610 Dauphine Gordini has been confirmed by the UK Alpine Club as a genuine Gordini, designated R1091 car. 244 YUU spent much of its life in Italy, where it participated in the ‘Rally 4 Regioni’ in 2011 amongst many other events before coming to the UK in 2013, where it was subsequently subject to much recommissioning work.

In addition, 244 YUU also received replacement door and window seals, front carpet and rubber floor mats, replacement wheels and tyres, period roof rack and further assorted finishing accessories including pipes, rear grille mesh, rear side vent, hub caps and more. The vendor states that although the car has received a replacement Solex Carburettor, it would benefit from a smaller carburettor and could also benefit from an interior fettle. Fitted with a 670-05 type 850cc motor and ‘Loved by all that see it’ 244 YUU comes accompanied with a number of invoices, the V5 document as well as a copy of the French registration document. The vendor rates the condition of the interior trim as ‘Good’, with the bodywork, engine, electrical equipment, paintwork and transmission as ‘Very Good’.