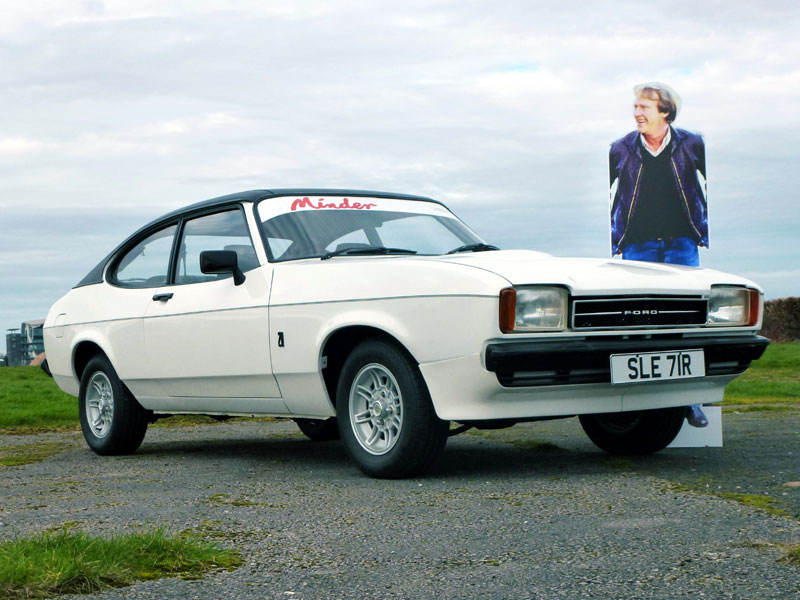 - Recent bodywork restoration and bare metal repaint in its original Ford polar white , new vinyl roof and interior refresh at the cost of £7,800

- Extensive mechanical overhaul including brakes, suspension, service and wax oiled at the cost of over £5,000

Dennis Waterman has enjoyed a long and successful acting career that took off with the role of DS Carter in 'The Sweeney' and was furthered by that of Terry McCann in 'Minder' - another Euston Films Series in which he not only played the likeable bodyguard (minder in London slang) to unscrupulous used car salesman Arthur Daley (George Cole), but sung the theme tune - 'I Could Be So Good For You'.

The MKII Capri offered here was first registered on January 25 1977 and is the actual car driven by McCann in Minder's opening titles and at various times throughout the Series, which ran from October 1979 to March 1994. 'SLE 71R', which was voted the '28th Greatest TV Car Ever' by Sky TV viewers, was reputedly acquired by a gentleman from Kent after Euston Films had finished with it, and is rumoured to have come close to being scrapped at some stage before belonging to John Hill of Capri Club International from 1991 to 2014, when it was purchased by the vendor. He now regards the body, White paintwork, 2.0-litre engine and manual transmission as 'excellent' and the Black interior trim as 'good', and small wonder as: £7,800 has recently been invested in bodywork restoration, a bare metal repaint in the original colour of Polar White, new vinyl roof, and refresh of the interior. The famous Ford has also benefited from over £5,000 worth of mechanical fettling involving attention to the brakes, suspension and wheels as well as a service and Waxoyl treatment.

Currently displaying 88,700 miles, the Capri is being offered with: a collection of old MOTs, plus an advisory-free one into March 2017; invoices for all the work carried out; not to mention the possibility of also acquiring its automotive co-star - ie Arthur Daley's famous Jaguar from the same hit Series. A once in a lifetime opportunity for TV buffs everywhere!

The choice of a Capri for former professional boxer turned minder Terry McCann was an interesting one. Though having served time in prison, he was cast as being basically honest and loyal, and his repeated attempts to find a better job suggest a degree of ambition. This linked nicely with the Capri, the model dubbed by Ford as 'The Car You Always Promised Yourself' - ie one for the young, aspiring mainly male driver. Launched in 1969, it was an all-new model range for the Blue Oval - a Coupe that was intended to reproduce in Europe the success of the mighty Mustang in the US - ie our pony car. And a success it most certainly was, with no less than 1.2 million sales accrued for the MKI version. The MKII model like the Minder car was launched in 1974. It was an example of gentle evolution rather than revolution, via which Ford heeded the lessons imposed by the oil crisis and attempted to make their popular Coupe better suited to the needs of the time. The revised model was treated to a shorter bonnet, larger cabin, more modern facia and smaller steering wheel. Most significantly, the Capri now gained a hatchback rear door making the stowage area far more easily accessible and giving rise to a boot space of 630 litres.

The engine powering the Minder car was the 2.0 single overhead camshaft Pinto unit, that in standard form produced 98bhp at 5,200rpm and 112 lb ft of torque at 3,500rpm. This drove through either a four-speed manual gearbox or C3 three-speed automatic. The result was no supercar, but a lively performer that allowed Terry to stay out of trouble - at least some of the time!
Share this page: