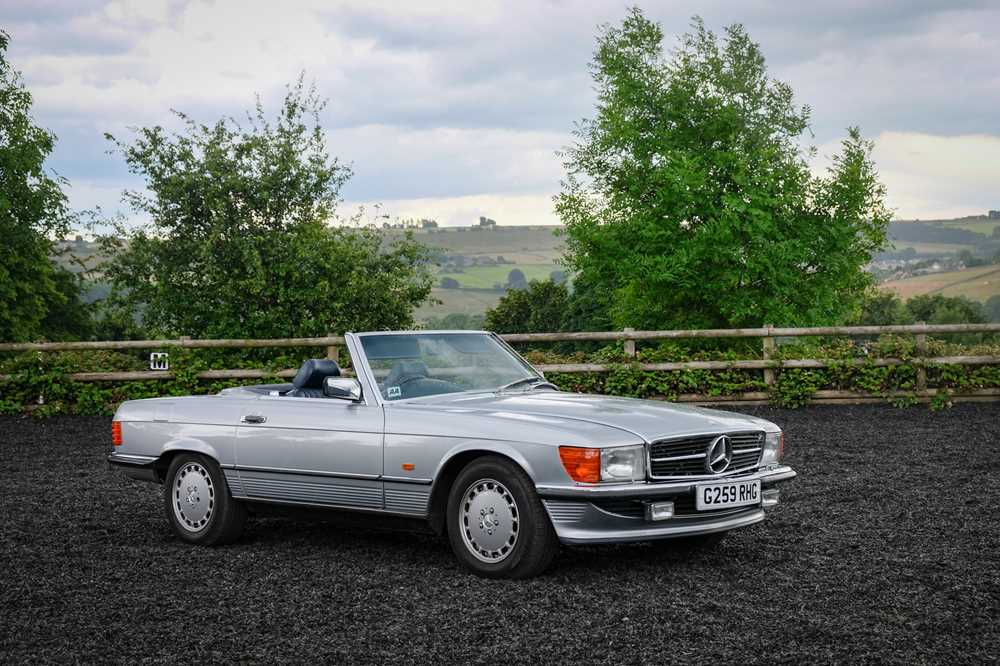 The ultimate six-cylinder derivative of Mercedes-Benz's renowned R107-series, the 300SL was introduced at the September 1985 Frankfurt Motor Show. Equipped with Bosch KE-Jetronic fuel-injection, its in-line SOHC M103 2962cc engine developed some 177bhp and 188lbft of torque (outputs sufficient for a reputed 125mph top speed). Sharing the same two-door monocoque bodyshell, all-round independent coil-sprung suspension and power-assisted steering as its V8 brethren it proved notably more fuel efficient. Fitted with a four-speed automatic transmission as standard, it further benefited from improved anti-corrosion treatment and ABS brakes. Only in production between 1985 and 1989, just 13,443 300SLs are thought to have been despatched worldwide.

A very late final year example first registered on 01 August 1989, ‘G259 RHG’ was presented in Astral Silver with contrasting Royal Blue leather interior and featured surprising factory optional extras including cruise control, headlamp washer/wipers and the optional extra rear seat. Acquired by its current owner on 12 July 2014, this particular example is offered showing a warranted 104,699 miles on the odometer with just 3 former keepers on the V5C document and comes accompanied with an impressive history file. This contains its original wallet with maintenance booklet containing 16 stamps. As well as this, the Sales and Service booklet, still housing the warranty terms and conditions, wiring diagram, fuel economy certificate, Blaupunkt cassette-radio manual and cruise control leaflet. The owner’s manual is also included. Within the file, there are MOT certificates every year from 1992 to 2011, then 2014, 2015, 2016, 2017, 2019 ,2021 – in total, 25, with there also being an MOT valid until 22 April 2023. In addition, there is a small collection of invoices for previous works done, with the most recent in April 2021, for a service invoice with Andrew Ellaway Ltd totalling £416,57. Also accompanied with the vehicle is a matching hard top and rare tool kit. The vendor rates the condition of the bodywork, engine, electrical equipment, paintwork and transmission all as ‘Very Good’, with the interior trim ‘Good’.