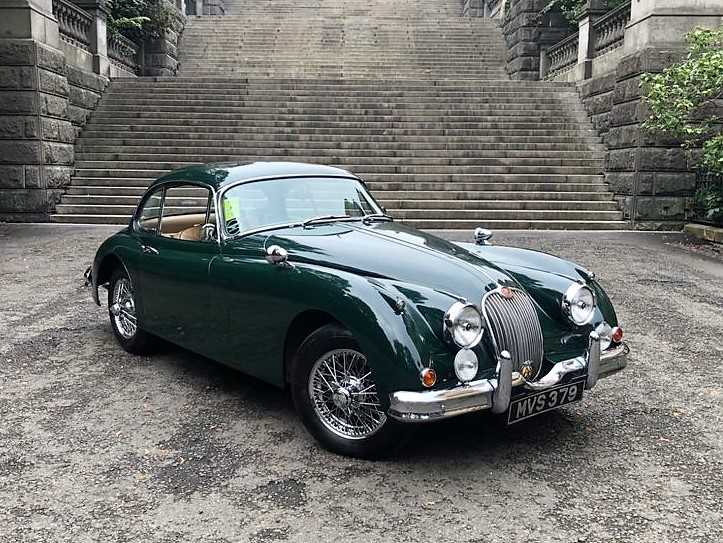 By the time the XK150 was launched in May 1957, Jaguar had won Le Mans four times and was about to do so again. Though the newcomer was a logical progression of the XK140, subtle changes to the bodywork gave this final iteration of the XK a distinctly more modern air. The split windscreen was replaced with a single sweep of toughened glass and the scuttle height was raised, along with the waistline. Inside, the walnut dashboard of the XK140 was replaced by one trimmed in leather. Thinner doors gave more interior space. The standard engine was the 3.4-litre DOHC straight six unit of the XK140, but a larger 3.8 litre version became available in 1959 with buyers able to opt for a triple carburettor ‘S’ version of either powerplant. The XK150 was the first production Jaguar to be equipped with disc brakes and at launch was offered in Fixed Head Coupe (FHC) and Drophead Coupe guise, the Roadster following in 1958. By the time the model was superseded by the E-Type, some 4,445 FHCs had been produced.

One of the later, more desirable 3.8-litre engined cars, chassis S836583BW was supplied new to America complete with the ‘Special Equipment’ package and automatic transmission. Repatriated to the UK during 1992, the Jaguar was the subject of a ‘body off, chassis up’ restoration with further works continuing up until 2010. As well as being repainted, retrimmed and treated to an engine overhaul, the 2+2-seater was uprated with a five-speed manual gearbox for a more immersive driving experience and better high-speed cruising plus an alloy radiator for improved cooling. Acquired by the current registered keeper in 2011, the XK150 has been used for runs to the Goodwood Revival etc. Summed-up by the seller as ‘a very good-looking car ready for further adventures’, ‘MVS 379’ is offered for sale with V5C Registration Document and history file.