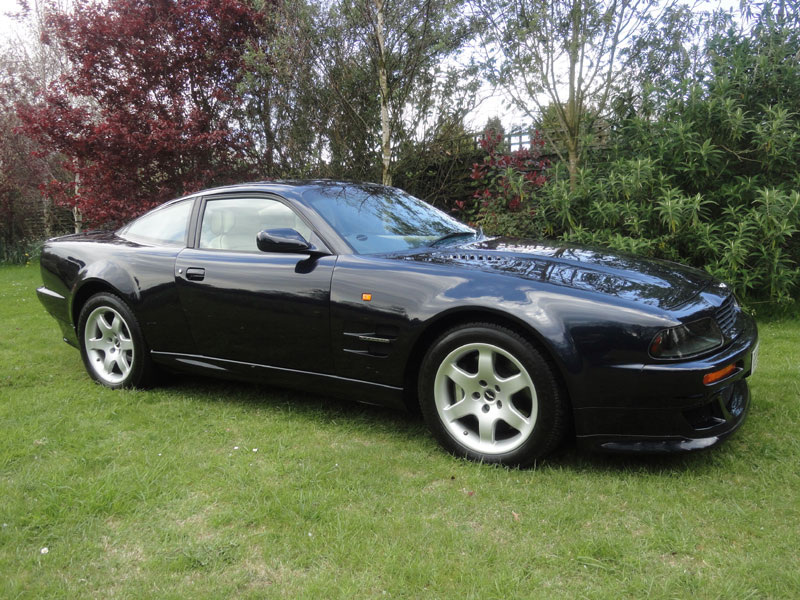 Among the last of the 'old school' Aston Martins, the Vantage was unveiled at the 1992 Birmingham Motor Show. Visually distinguished from its lesser siblings by a wider track, flared wheelarches and jutting front air dam not to mention six headlights and four 'grapefruit' tail-lights, the newcomer's aggressive lines were the work of John Heffernan and Ken Greenley. Among the most powerful front-engined GT cars ever to torture tarmac, the Vantage extracted some 550bhp and 549lbft of torque from its 5340cc DOHC 32-valve V8 engine via the addition of twin belt-driven Eaton superchargers (complete with air-to-air intercoolers).

Fitted with independent double-wishbone front suspension, a Watts linkage located de Dion back axle, six-speed ZF manual transmission and high geared power-assisted rack-and-pinion steering (2.87 turns lock-to-lock) as standard, it also benefited from ABS-backed vented disc brakes. Reputedly capable of 0-60mph in 4.6 seconds, 0-100mph in 10.1 seconds and 186mph, the 2+2 Super Coupe was rechristened the V8 Vantage during 1996. The model was only in production between 1993 and 1999, and just 239 'standard' Vantage / V8 Vantage cars are thought to have been made all told.

Finished in Antrim Blue complemented by a Pacific Blue and Parchment-coloured leather interior, this 'matching numbers' V8 Vantage is a three owner example that has still covered just 8,000 miles from new. It was converted from the standard manual transmission to automatic by Aston Martin's own service department when new, and comes with all the other refinements expected of such a stunningly rapid GT car. Seemingly still very original, this rare and collectible 550 is now offered for sale complete with Aston Martin service history, owner's manual, spare key, current road fund licence and MOT certificate valid until the end of October. A rare and appreciating asset.

PLEASE NOTE: This vehicle has an MOT until September 2012.
Share: