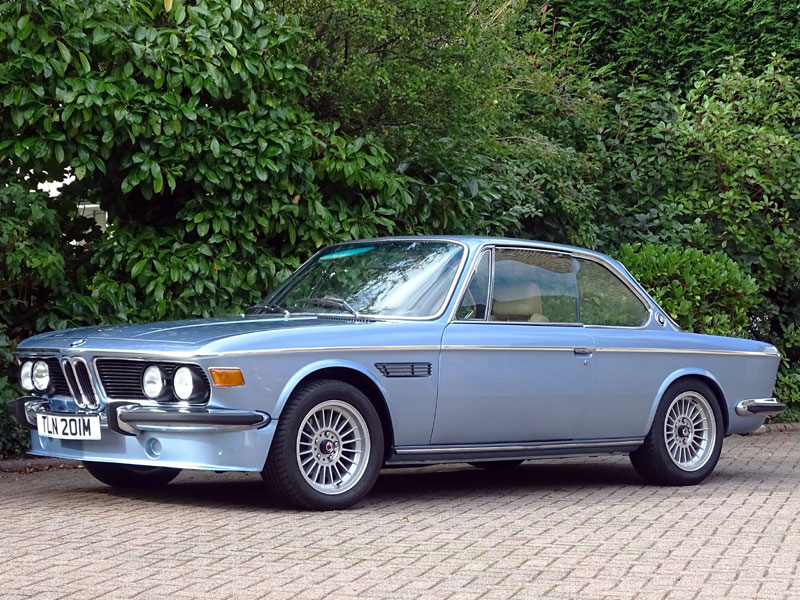 Just 207 RHD examples of the Karmann-bodied 3.0 CSi are thought to have been UK supplied. According to an accompanying letter from BMW (UK) Ltd, this particular example was manufactured on August 30th 1973. Originally finished in Fjord Blue, it was the subject of an insurance total loss payment during July 1991. The reason why is unknown. However, it seems highly improbable that the CSi suffered any major structural damage if only because of its subsequent transformation. Acquired by classic car restorer and race preparer Costa Ouloupis as a personal project in 2005, the BMW became a labour of love that took some six years to complete. Stripped bare, the bodyshell was refurbished with a replacement bonnet, front panel, boot lid, doors and front wings. Repainted in its initial Fjord Blue livery, it then received a drivetrain transplant from an E34-series BMW M5. No stranger to the Munich firm's machinery, Mr Ouloupis overhauled the DOHC straight-six with Shrik camshafts so that it developed an estimated 325bhp. Utilising the same donor vehicle's close-ratio five-speed manual gearbox and limited slip differential seemed prudent as did installing Bilstein suspension and vented disc brakes hidden behind period 16-inch Alpina alloys (the latter being the only external clue to the Coupe's much enhanced turn of speed). Chosen for their greater comfort and support, the E34-series M5 also donated its Beige leather seats to the project. A real wolf in designer sheep's clothing, `TLN 501M' is understood to have covered circa 3,000 miles since its refurbishment / upgrading was completed. Still highly presentable, it seemingly offers the best of both worlds; classic styling allied to modern high performance. Passing its last MOT certificate on February 12th 2016 with no advisories, the vendor has arranged for the BMW to undergo an HPi-approved Autolign inspection so as to reassure any potential purchasers (www.autolign-inspections.co.uk).

PLEASE NOTE: This lot failed its Autolign Inspection due to the following: (1) 'Cosmetic Exterior Panel Repairs', (2) 'Some high spot body filler repair readings to both offside and nearside 'A' and 'B' posts. Same area needs further investigation', (3) 'Rear Service brakes inefficient below MOT minimum standard' and (4) 'Rear Panel MIG / Gas welded to boot floor with open seam work'. A copy of the Autolign Inspection Report is available to view in the Documents' Office. Since the inspection was carried out the vendor has had the rear service brakes adjusted and the recommended welding attended to. He has not investigated the 'A' and 'B' posts because he did not want to disturb the paintwork / associated trim.
Share: