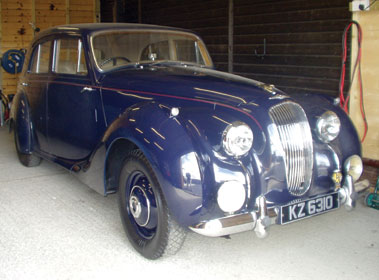 Despite Lagonda's commitment to the war effort (manufacturing specialised aeroplane and tank components as well as general ordnance etc), their chief engineer W.O. Bentley - ably assisted by W.G. Watson and Donald Bastow - began work on a new car in early 1944. Conceived as a compact sports saloon, the resultant design boasted an innovative cruciform-braced chassis equipped with tubular side members, all-round independent suspension (coil and wishbone front / torsion bar rear) and hydraulic drum brakes (inboard at the back). Powered by an equally advanced DOHC straight-six engine featuring hemispherical combustion chambers and a one-piece cylinder block / crankcase casting, its flowing lines were the work in part of Frank Feeley. Unveiled to an enthusiastic press in September 1945, production plans for the `2.5 Litre' fell foul of the prevailing `export-or-die' atmosphere with Lagonda failing to negotiate sufficient steel supplies for such a low volume, home market model. Unable to recover financially, Lagonda was bought by industrialist David Brown in 1947. Merged with Brown's other recent purchase Aston Martin, the two companies operated out of the latter's Feltham premises. In addition to donating its powerplant to the nascent Aston Martin DB2 programme, the `2.5 Litre' was developed in its own right. Fitted with a David Brown S430 four-speed synchromesh gearbox, rack and pinion steering and hypoid back axle, it reappeared at the October 1949 Earls Court Motor Show as the DB Lagonda 2.6. Although, very highly regarded in its day, the survival rate among the 511 2.6s believed built is comparatively low.

Finished in blue with beige leather upholstery, this particular example is variously described by the vendor as being in "good" (engine, electrical equipment, interior trim) or "excellent" (bodywork, paintwork, chromework) order. While, he goes on to say that the Lagonda was "first registered in County Antrim on 17th August 1951 to Doctor Maurice C. Brogan who used it regularly for the next twenty-years. Laid-up thereafter, the saloon remained in dry storage until 1997 when it was bought by Michael McCallan Esq of County Tyrone and treated to a `no expense spared, chassis up' restoration". Apparently "seldom used since being refurbished to its present show condition", the 2.6 is reported to "run and drive well". However, given its recent inactivity the seller feels that "slight recommissioning would be advisable". A rare survivor, this elegant Lagonda is offered for sale with "an original buff logbook, handbook, service book and lubrication card" as well as "a host of parts, maintenance receipts and restoration photographs".
Share: