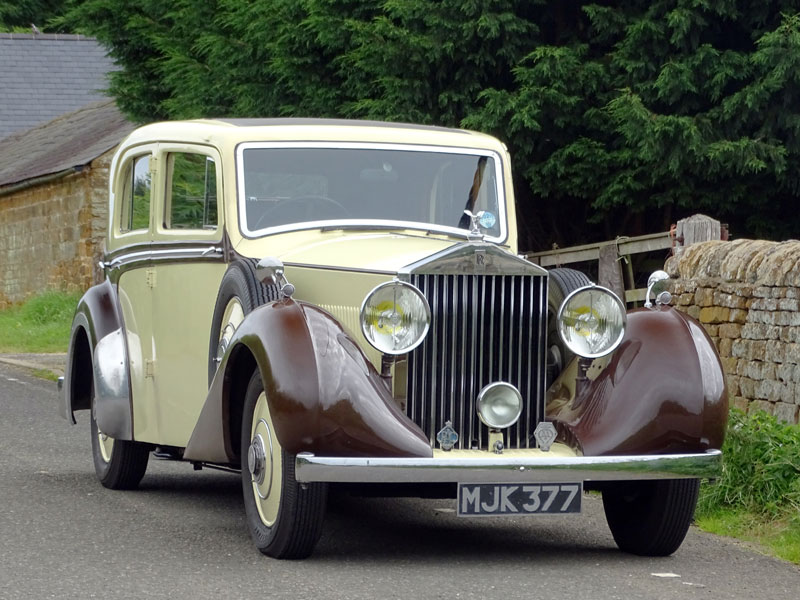 This charming long chassis 25/30 is finished in Cream over Brown and trimmed in Brown leather. Its Windovers Saloon body includes a Division and 'MJK 377' is thought to be one of just six Rolls-Royce 25/30s clothed to this design. It was supplied new on October 20, 1936 to W Johnson of the Basset confectionary company. The suitably impressive specification includes Marchal headlamps, twin spare wheels, chrome luggage rack, GB plate and cocktail cabinet. The Rolls has remained within the same ownership since 1984 but is now seeking a fresh chapter in its life courtesy of a new keeper. It comes complete with V5C and a copy of the factory records, as supplied by the RREC.

Maintaining its policy of offering one 'Large' and one 'Small' model (the terms being purely relative), Rolls-Royce introduced the 20/25 in 1929 as a successor to the outgoing 20. Though the newcomer was intended to appeal to owner drivers, many examples were in fact sold to customers with chauffeurs. Power came from an enlarged version of the straight-six unit used in the 20. Now of 3699cc, it made for swifter acceleration and a higher top speed - up to 75mph, depending on the chosen body. The four speed manual gearbox featured the manufacturer's traditional righthand change and was equipped with synchromesh on the top two ratios from 1932 onwards. The substantial chassis sported rigid axles front and rear suspended on semi-elliptic leaf springs. The four-wheeled braking was mechanically servo assisted. In 1936, the company opted to increase performance once more, further enlarging the engine to 4257cc to create the so-called 25/30, of which 1201 examples were made before the model was superseded by the Wraith in 1938. Like most Rolls-Royces, the 25/30 starred on the silver screen, most notably in 'The Naked Truth' and 'Death on the Nile'.
Share: