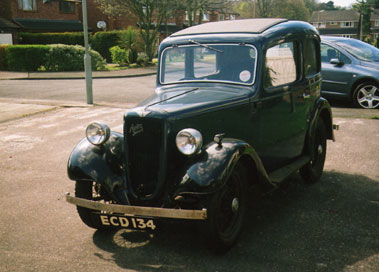 Finished in blue over black with blue / black hide upholstery, this particular example is variously described by the vendor as being in "OK" (gearbox, electrical equipment, wheels / tyres) or "good" (engine, bodywork, paintwork) condition. Though, he considers that the interior trim and chromework "need attention". Reportedly "dry stored for thirty years", 'ECD 134' is since understood to have been treated to some remedial paintwork and a mechanical overhaul including the replacement of its exhaust system and rear springs. Riding on painted wire wheels, it sports Lucas lights and a wood grain effect dashboard.