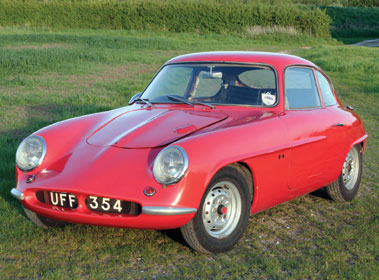 The Lotus Elite, the first glassfibre monocoque, was barely in production when well established 'special' body builder Rochdale Motor Panels launched the exceptionally well thought out Olympic. Stronger because it was laid up in one piece inside a bolted-together mould, with inner mouldings added while still in the mould to avoid distortion, the Olympic was designed to accept readily available BMC or Ford running gear. Motoring journalists were astonished at the speed, agility and sheer competence of the design. It had exceptional aerodynamics, aided by a very curved screen and streamlined undertray, light weight ensured by graduated thickness of glassfibre so it was strong where it needed to be and light where it didn't, and ingenious suspension design combined with a low centre of gravity achieved by mounting the engine low and well back in the shell.

Built in Norfolk by P Greengrass, this Olympic used Morris Minor running gear, modified by Rochdale to radius arms and coil spring/dampers at the rear, making one of the best 'live' axle layouts. The car enjoys a full Rochdale trim kit (seats, headlining, door trims, rear seat cushions and folding backrest), the two front seats having been accurately retrimmed by Creech Coachtrimming. Malcolm acquired the car for everyday transport in 1989 when he joined Classic Cars magazine and clocked up many thousands of miles while gradually improving it. The car won several trophies on Rallyes des Alpes and the AMOC Rally. The engine was fitted with a Shorrocks supercharger kit and a very well developed cylinder head, giving c100bhp from 948cc while remaining exceptionally tractable and returning 40mpg. A worn 1098cc block is currently fitted, but a very good 948 block will be made available with the car.