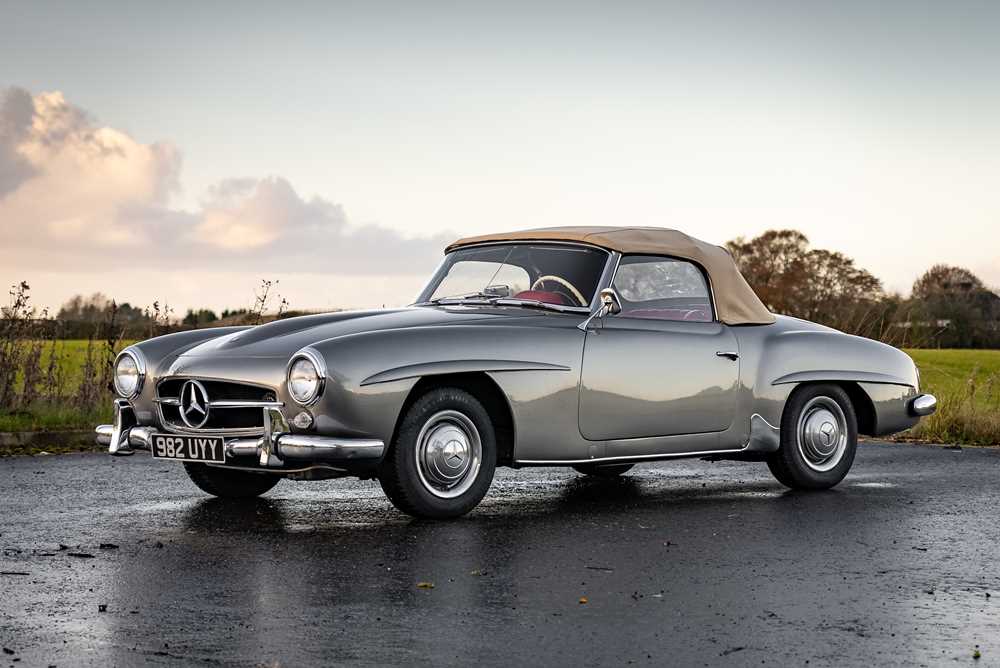 The 190SL was introduced in 1955 – the year Mercedes swept all before it on the Mille Miglia with the 300SLR. Indeed, the graceful, new two-door, convertible grand tourer was sold alongside the road-going version of the SLR – the 300SL - whose styling it strongly resembled. In fact, the underpinnings of the two cars were quite different and, while the 300SL had a purpose-built tubular spaceframe (W198), its smaller sibling was built on a shortened version of the ‘Ponton’ saloon (W121) platform, which was of monocoque construction. The 190SL also boasted an all-new engine - an over-square SOHC straight-four unit of 1897cc that produced some 120bhp, which was sufficient to propel the car to a maximum speed of 112mph. The engine was coupled to a manual four-speed gearbox. The suspension comprised double wishbones and coil springs at the front and a coil-sprung swing axle at the rear. Steering was by recirculating ball and braking by power-assisted drums all round. Built to the highest standards and among the quickest comparable cars of the time, the 190SL featured a well-appointed cockpit, notable comfort for its occupants and relatively generous luggage space. Under the circumstances, even the steep asking price of £2,693 did nothing to deter purchasers. Options included a third seat placed transversely behind the front ones which was big enough to carry an adult. The 190SL continued in production until 1963, when both it and the 300SL were replaced by the 230SL (W113). By this time 25,881 190SLs had been produced (just over two percent of which – some 562 cars - were to right-hand drive specification).

According to a letter on file from the Homologation Department of Mercedes-Benz Cars UK Ltd, chassis 121042-55-00239 was built in August 1955 to left-hand drive specification and supplied new to America. An Ohio resident for many years, the 190SL was imported to the UK and registered in the vendor’s name during February 2018. Much improved over the last three years, the two-seater has been repainted in Grey Metallic and had attention paid to its cylinder head gasket, seals and heater etc. Treated to a full service and partial brake system overhaul by Wilson Healy Automobile Engineering Ltd of Southport in February 2021, ‘982 UYY’ had its starter motor overhauled just last month.